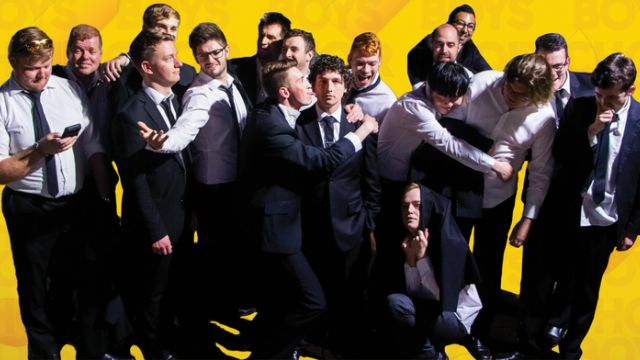 Fringe favourites Festival Statesmen Chorus are back with a new juke-box musical Choir Boys, a show that is sure to please fans, old and new alike. It’s an hour-long toe-tapping, laugh-out -loud journey with the boys as they travel from Klemzig to Hobart to ‘The Grand Acapella Voices in Harmony Festival’.

Deftly written by Nick Munday (also look out for his cameo role – it’s a delight) the show uses an hilarious plotline to string together a plethora of popular songs cleverly arranged for this talented acapella choir. This is an award-winning choir and, as you would expect, the harmonies are tight and crisp.  Add in some slick choreography, a clever script, a dash of fantastically quintessential Australian humour and you can see why this show was the recipient of a weekly Fringe Award.

The show opens at the boys’ sound check in Hobart Town Hall, immediately breaking the fourth wall, with dialogue being fired between musical director John Khammash and the less than competent ‘sound technician’ at the back of the auditorium. This breaking of the fourth wall sets the scene for further deliveries directly to the audience from Trevor Anderson, as wary and inhibited Allan, and Jono Webb, as outgoing and effusive Steve; the protagonists of the show. This technique cleverly draws the audience into the action and creates instant empathy.

We follow the boys on a night of revelry that may have been wiser after the competition than prior to…but therein lies the hilarity. From pub to boozy room party, tinder club date to bizarre party with the Brethren (I don’t want to give this scene away but think the Masons crossed with the Greens).  We all know the night wouldn’t be complete without a stint in a prison cell, and there, Brett Woolford steals the scene with rambling musings on lobsters and some interesting yoga moves, sans trousers. Overall, director Mitre Khammash has delivered a rollicking, yet tight and highly polished show.
In the hefty annals of juke-box musicals this one ranks highly for me. It would be great to see this group get some backing to expand the show and polish it further.

While some of the customary Australian humour might not make it export material (although, look at Priscilla!), I can see this touring nationally and being embraced by the Glee and Pitch Perfect generation.