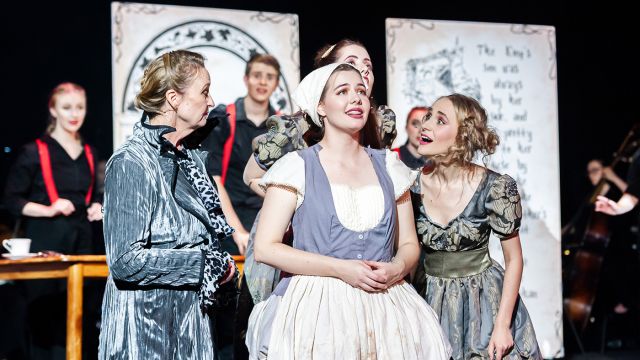 With a cast of 24 and more than 15 crew, Cinderella is a major undertaking for relatively new musical production company, Lynch & Paterson – a creative partnership founded in 2015 by the multi-talented Lucas D Lynch and Samantha Paterson to present musical theatre, opera, orchestral works and other stage productions. With several successful productions under their belt, the strength of this Cinderella is the standard of the ensemble work. There is so much talent in Brisbane and our surrounding regions, and it is a joy to see so many substantial performances on the stage, even in supporting parts. Everyone in the cast adds humour and pace to help this delightful fairytale move along at the right pace.

Originally written for Julie Andrews for a TV broadcast in 1957, Director (and Choreographer) Maureen Bowra has given the script a teeny makeover to rejuvenate it for today’s audiences. And there is much to enjoy – from solid supporting work by Nicole Wheeler (what a beautiful voice) and Nathaniel Currie (lovely comic timing) as the Queen and King, to the thoroughly modern millennial step-sisters as portrayed by Sophie Price and Louise Hayes, with their wickedly real-housewives mother played with relish by Meg Kiddle. Cinderella and her Prince are perfect lead material: Tom Markiewicz adds a warm strength to what could be a sappy role as Prince Christopher; his ‘Do I love you because you’re beautiful’ has a nice Hamlet-esque touch – the ever-questioning young man, unsure of making a decision – until he finds his perfect match. Fittingly, it is Madeleine Ratcliffe who wins everyone’s heart as the ever-optimistic Cinderella, making do with her ‘own little corner’ and hoping that she can make her wishes come true.

This is no ditzy Disney princess – perhaps because Rodgers and Hammerstein based their tale on the original French version by Charles Perrault rather than the later adaptation by the Brothers Grimm. And the production is refreshingly free of panto gimmicks. The costumes by Anita Sweeney are fabulous – sleek and stylish. Georgina Purdie makes a wonderful Fairy Godmother in her red sequins and satin. She is a modern feminist mentor – urging Cinderella to take control and make things happen. The production uses a nifty device of having her helpers as magic stage sprites creating many of the settings – most memorably the giant clock face that counts down to midnight. It’s wonderful to see the Princess Theatre being used for musical productions again – especially the deep stage filled with nearly 20 talented musicians in Cinderella’s orchestra, led by Musical Director Lucas D Lynch. The live music adds such a depth to the production.

I wouldn’t say that the songs from Cinderella are Rodgers and Hammerstein’s very best – but ‘Impossible things are happening’ is a wonderful theme and you will still go home humming the main tunes with a smile on your face!

Watch out for more from this talented team. The next production for Lynch & Paterson will be The Pirates of Penzance in Concert in February 2020.