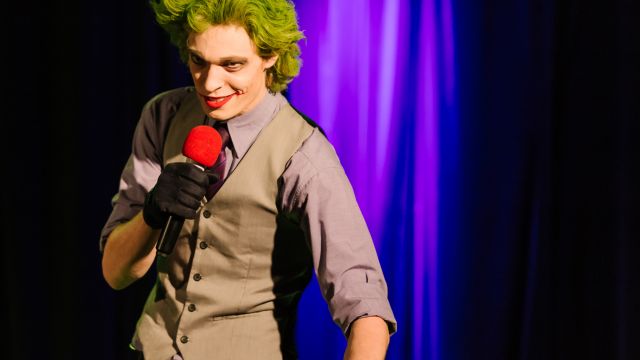 There is a real sisterhood amongst burlesque artists in Adelaide. They rally to support each other and certainly spur the audience on to almost fever pitch at times.

Club Gotham: Villains of Vaudeville brings together some of Adelaide’s finest burlesque performers under the guise of female crime fighters or villains.

These heroines (or anti-heroines) are led by none other than the Joker, complete with his trademark green hair and crooked smile. Quick patter, snappy one-liners and ad libs ensure that we are an integral part of the show and keeps the energy of the show flowing. Special mention must be made of the Joker’s ability to control a heckler who tried several times to draw the focus. He kept this heckler at bay while not putting him down.

The Joker is aided by Harlequin, a tall, white-wigged silent partner, who clears the stage between acts. Ironically Harlequin’s ‘number’ is the highlight of the night; slick, sexy and brilliantly choreographed.

Some of the burlesque reveals were amongst the most inventive I have seen. These include, Deathstroke, whose pasties include guns to aim at the audience, Scarecrow whose face seems to detach at one point, Firefly whose pasties light up and flash and Clark, a tribute to Superman, whose strip is straightforward. However the addition of Superman pasties on various parts of Clark’s body, together with clever choreography, are a stroke of genius. There of course has to be a battle of good and evil in this cavalcade of femininity. This occurs between the Joker and Batman, a tall bearded hulk of a man in terrifying tall boots. Naturally good triumphs, or does it?

The vocal work for the night consists of lip-synching and live voices. The lip-synching was excellent when I attended, the live voices less so (except for “Diamonds are a Girl’s Best friend”).

In a show that features ‘working the audience’ so heavily I found it strange that the live vocal numbers were stuck behind a stand microphone when hand microphones would have enabled the performers to roam the stage and auditorium.

My only other reservation is the lack of pressing of some of the costumes (particularly the Joker’s jacket).

Club Gotham: Villains of Vaudeville is an entertaining night out (though not for the kiddies) that just needs to run in a little more to perfect the routines and the technical side.