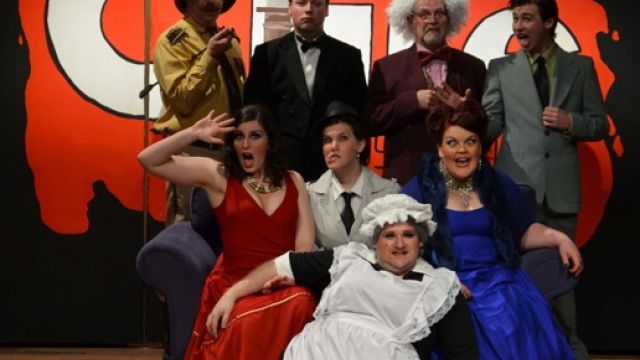 How do people dream these things up? A musical based on a board game? It was very clever and it worked!

MDMS do one major production each year and usually a concert for their second show. This year they instead chose Clue the Musical, based on the board game Cluedo. Requiring eight actors, no chorus, one basic set and a three piece band, this is ideal for a small professional touring company but not for an amateur company wanting to keep their chorus happy.

The characters from Cluedo were all there: Mr. Boddy, Mrs. White, Professor Plum, Miss Scarlet, Mrs. Peacock, Colonel Mustard and Mr. Green, with a detective in the second half to sort out who was responsible. All were well played and suitably over-the-top!

Six clues were presented to the audience who had working sheets to help sort out the identity of the murderer. These were based on the result chosen by audience members near the start, but concealed in an envelope. At the end, the cast came into the audience to collect the sheets, and correct tickets were put into a barrel and one was chosen for a prize.

The music was appropriate, though I didn’t come away whistling any tunes. The singing was variable, though Ang Cuy as Mrs. Peacock was outstanding. Stuart Dodge was a very funny Mrs. White but all parts were well taken. The cast and audience had a ball.

The three-piece band was too loud at times and I would have preferred just a piano and no microphones in the small venue.

If it comes on again, don’t miss this show.