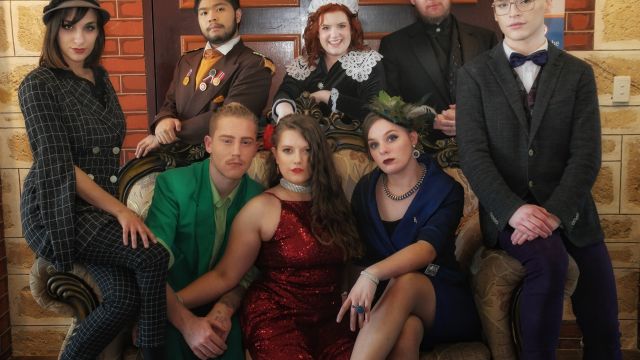 CLUE The Musical, while not really a ‘new’ show, makes its West Australian debut at Phoenix Theatre. This art deco venue feels perfect for this show, set vaguely in the past.

Based on the board game ‘Cluedo’, CLUE’s characters are the characters from the game. The show has an interactive element, in which audience members are asked to randomly select cards that determine which character will commit the murder, the weapon they will use and the room in which the murder will take place. These are placed in a sealed envelope, displayed throughout, and some of the dialogue and hints dropped throughout the show change each performance to help the audience determine which of the 216 possible ‘endings’ is being played.

The victim, Mr Boddy, hosts the evening (even after his mid show demise). Played by Krispin Maesalu, Mr Boddy has most of the responsibility for the changes in each performance. Krispin is on his toes and handles this responsibility well.

While many of the actors are noticeably too young for their roles, they have a strong sense of ensemble, working hard to create the rather bizarre characters, helped by Krispin Maesalu’s costuming. Emily Botje gives Miss Scarlett a southern belle charm, Bree Redhead brings sophistication to the oft widowed Mrs Peacock, with A.J. Winters bringing a different take to Mrs White. James Dagleish is suave, if a little hard to hear as Mr Green, Edzelle Abrio has military bearing as Colonel Mustard and Charlie Darlington is a believable Professor Plum. It is worth waiting for Kiara Macri’s second act appearance as the attractive and efficient Detective - she gives the production a kick with a dynamic, slightly tongue-in-cheek performance. The choreography, by Ashleigh Winter, features some top-notch patterning, and while not always perfectly executed, the dance numbers are impressive.

Extra characters, of sorts, appear in the form of the talented three piece band. Aiden Bridges is Mr Slate-Gray on piano, Amanda Reynolds is the very elegant Dr. Orchid on cello, with Jake Isard playing Mr Rusty Nailer and percussion. They perform under the musical direction of Ben Albert.

Technically there are a few issues with this show. While the set design by Ben Albert (who obviously has some quite diverse talents) works very well, it feels like there just isn’t enough light. Some of the action falls forward of the light pool, and while being under-lit gives a sense of eeriness, we are not privy to the vibrancy and colour of the costuming, which seems key to this show. Sound levels for the actors could also be lifted.

A fascinating concept, CLUE is a really interesting musical, and it is wonderful to see a show that is new to Perth. A great choice for those who like interactive musicals and those who want to see something new.