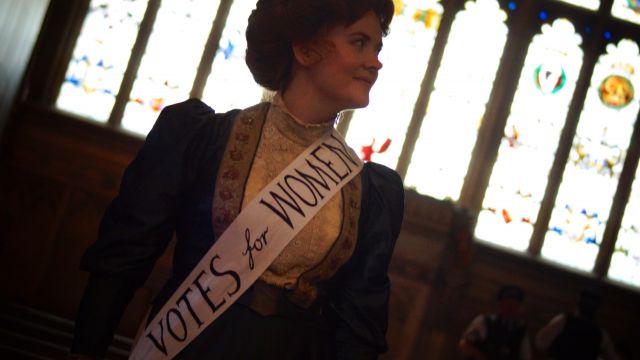 From beginning to end, Joanne Hartstone’s performance in That Daring Australian Girl is a triumph. With subtle nuance, expression and gestures, all in keeping with a woman at the turn of last century, Hartstone captures little celebrated Muriel Matters and her extraordinary life with colour and passion.

Hartstone, a veteran of 12 Fringe seasons, does not waste a single second of the hour–long production devoted to Matters’ multi-faceted story.

The stage is set with a trunk, used brilliantly, later as a “flying machine”, a mirror, coat rack, lamp, dressing table and several Bentwood chairs. Each of these items has a role to play as the story unfolds. The chair and box used as a carriage are a triumph.

The hall is filled several times with misty smoke used to evoke “period” during the performance. Patrons who suffer from asthma may need to use caution as a number of people were coughing and fanning smoke away. Sound effects are well used, particularly as Matters is heckled and abused by angry naysayers, including politicians of the time.

Nikki Fort’s costumes are appropriate, utilitarian and often layered for skilful effect, never leaving the audience waiting for the breath-catching action to roll on. My only reservation is with a very modern-looking umbrella that is, none the less, effectively used.

An unobtrusive screen on stage is used effectively to herald and link chapters of Matters’ life between the Boer War and 1924. The black and white slides are of a silent movie era style and contain entertaining and often important snippets from media and people of the time. Dates included help the audience keep pace as Matters’ action-packed achievements unfurl. Some of these slides were shown very briefly and the audience needs to be alert. 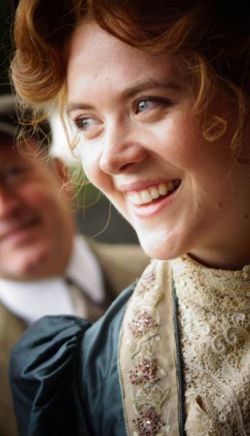 Matters, born in Adelaide, where enlightened politicians had already given women the vote, claimed that, "I was born a suffragette. I saw that the world treated women unfairly, and rebelled. The Women of England demand the Vote!" Seeing this performance on International Women’s Day added extra poignancy to Matters’ story of courage, rebellion and compassion.

The parallels are also strong with the women of the tale, with both Hartstone and Matters Adelaide born, raised and educated actors. In fact, because of Hartstone’s skill as a master storyteller who immerses herself in Matters’ character, the audience feels that it is Matters to whom they are listening.

Matters was a middle class woman who, as a young woman and much to everyone’s chagrin, chose adventure over marriage. As a young woman she chose not to be “possessed” by a husband who would take her earnings and wealth. She raised the 19 pounds needed and sailed to England on the White Star Line. She was strong, independent, and a working actor and renowned orator who was appalled by the poverty in London and angered by the oppression of women there. Her passion led her to join Emily Pankhurst’s suffragettes and later to establish her own movement where she and the love of her life, Violet Tillard, chained themselves to the grille in Parliament house, resulting in shame, abuse and a 30-day sentence in Holloway Prison that nearly broke her spirit.

On her release, undaunted and unrepentant, she took her protest to the skies in a “strange sausage-like suffragette vehicle” showering London with leaflets. Hartstone excels in this scene.

Invited back to Australia, Matters became known as the “actress agitator”, a title that pleased her greatly. She even garnered the support from the Australian Prime Minister, Andrew Fisher for the English suffrage cause.

In the end, it was war that solved the issue. The world saw the undeniable role that women played in keeping nations together and women in England finally got the vote. Hartstone’s beautiful, clear song rendition at this point is powerful and moving.

That Daring Australian Girl is not a history lesson, but if it were, students would be lining up to subscribe to this mesmerising tale. It is a story, in Matters’ own words, that ushered in “a new order founded on character”.

See it and celebrate courage and achievement.