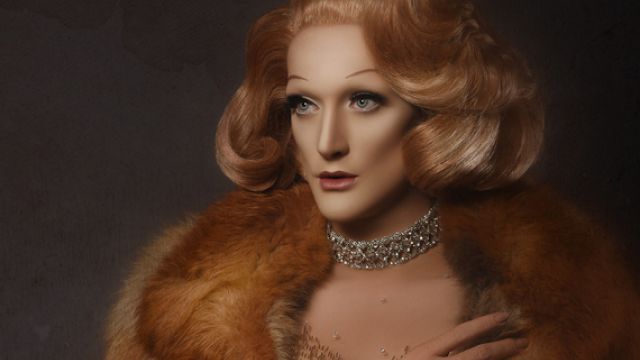 Dietrich: Natural Duty has been performed around the world, and it is Londoner, actor, singer and dancer Peter Groom, as both author and performer, who brings this legendary Hollywood star to life.

Billed as a one (wo)man show, Groom has created a blend of theatre, cabaret and drag that gives us insights into the woman known to most of us only as an untouchable, enigmatic iconic image.Groom is languid, capturing the audience with Dietrich’s famous four-step eye contact, holding each and every one of us in her palm. The costume, makeup and hair are exquisite. Almost immediately with precision and style, Dietrich, not Groom, is there, telling a story of surprising grit, determination, resignation, pathos and courage.

His research results in Groom embracing how Dietrich postured, posed, stood, used and held her mouth and eyes, and importantly how she captivated an audience. The characterisation is deep, vulnerable and believable, with just a hint of humour and, at times, impatience. Groom also shares little known facts about Dietrich, the woman with a sense of duty to work, family and country.

Born in Germany in 1901 and daughter of a Prussian soldier, Dietrich’s career continued until 1984. Her upbringing is credited for helping her develop the strong sense of duty that saw her fight for freedom, marching with the troops, not behind, but at the battlefront. Invited by Hitler to become ‘Queen of the Reich’, she refused, denouncing Hitler, renouncing her German citizenship to become an American citizen and joining the US Army. Her family remained in Germany, and for Dietrich she faced the reality that she was raising money for the armaments that were destroying her homeland and family.

This piece of theatre focusses on a woman who has gone to the Allied trenches as a ranking Captain at the behest of General Patton, telling her story, oozing her sexuality, to build morale and entertain Second World War Allied troops.

Known to revile the notion that acting was a complex and precise craft, Dietrich’s languid acting style was unique, setting her apart from the other female actors of the time, and indeed actors of our time. She commented, “You did what you were told until it was over”.

Very much a gay and drag icon, famous for her mannish dinner suits, top hat and tails, in a sense, much of her public life could be viewed as a drag performance. She chose to use her Hollywood persona, fully made up, glamorously dressed and coiffured; ‘dressed to kill’, even in the trenches, so the development of this show by Groom, as a piece of drag theatre, seems both natural and logical. Dietrich was consciously controversial, political and powerful.

Singing live, Groom, accompanied only by a pre-recorded piano, is note perfect, punctuating the story with apt songs of the time, and in the style of the time.

The show ends with “Falling In Love Again” which is the song for which she is arguably best known; for me and no doubt for many, that is the case.

I cannot help but think that this very high quality, funny, charming performance may be as well placed as a featured performance in our upcoming Cabaret Festival.