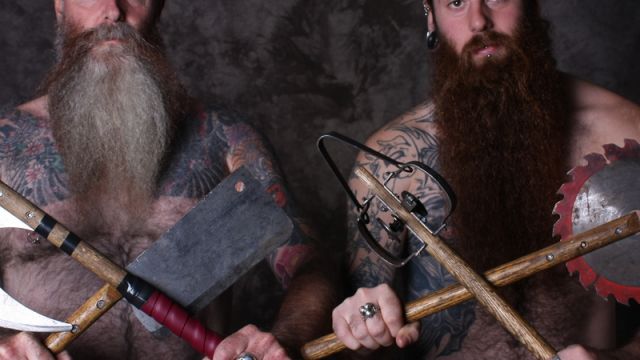 Touted as Cirque du Soleil meets Motorhead, Dirty Tattooed Circus Bastards is more reminiscent of Jackass meets Spinal Tap.  Over the course of an hour you will feel amused, amazed, confused and, at times, worried for the performers’ wellbeing.

Performed by two bearded and inked Irishmen, Martin Mor and Logy Logan, this show appears to have been constructed as an attempt to see how much dangerous, hilarious stuff two mates could fit into an hour.  In reality, these two are skilled and slick circus performers with a gift for comedy.

Mor and Logan begin with a rather impressive poi routine, as a tribute to their attendance at a legitimate arts festival. The pink and white display of poi is impressive, not only due to how deceptively complicated this circus art is, but primarily because of how strange it is to see two big, burly men leaping about doing it. From there, the show only gets stranger, and yet more hilarious.

Audience participation was welcomed by all, many accepting breadsticks before Logan used a whip to crack one out of his own mouth amongst other bizarre body places. Perhaps the mostly eager willingness by the audience to participate was aided by the beer-fuelled 10pm time slot.

The pair’s constant improvisation and banter somehow gives the whole show some coherence. The chemistry and understanding between them also makes their decision to juggle $100 worth of ‘sharp stuff’ from Bunnings (in place of juggling clubs) seem slightly less terrifying, almost like a good idea.

There are certainly some tense moments, including the head of a mattock becoming loose and the boys still deciding to still juggle with it. Mor shows off his ‘dealing with sharp things’ skills further by balancing an axe on his face, and then inexplicably decides to demonstrate his wood chopping skills. Expect the unexpected...

This show is truly a tour de force of strange circus and comedy skills. In the wise words of the godfather of boys doing impressive, dangerous things, Johnny Knoxville, “People go to car races to watch the crashes”. While the show isn’t a car crash by any stretch of the imagination, it does elicit a fear of bodily harm, and once it starts you simply can’t look away or stop laughing.