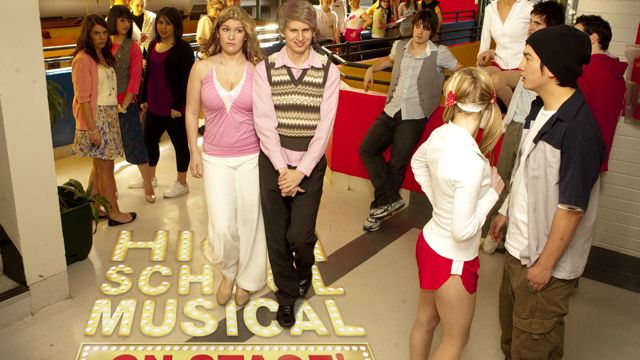 There’s trouble when Troy, the High School basket ball star, and Gabriella, a shy academically gifted newcomer, both want to audition for the High School Musical Juliet & Romeo. Add Sharpay and Ryan Evans, plus all the others who don’t wish this to happen, and there’s a plot and a half.
A magnificent stage setting, the entrance to an American High School, changes to the various scenes were excellently executed.
Costuming suited both period and country, with lots of changes keeping the cast busy.
Kyahl Anderson gave a remarkably good performance as Troy, the hero, capturing the gifted basket ball player who really wants to sing. Anderson also had a wonderful rapport with Gina Mets, who gave a professional interpretation of Gabriella, the new girl who also wanted to be in the musical. You could easily imagine that Mets and Anderson had played together all their lives.
Cathy Brocklehurst gave an outstanding performance as Sharpay, the girl who wants her own way no matter what, capturing the character to the extent that she nearly stole the show. David Miles was Sharpay’s brother Ryan, who did not always agree with his twin sister, who considered herself the boss as she was born a few minutes before him. Miles gave a good performance, sharing a good rapport with Brocklehurst.
As Troy’s father, Coach Bolton who could not understand his son wanting to sing,Steve Simmons caught the character as envisaged and had some good scenes with Brigid Deneefe, who gave a great portrayal as the music theatre director Ms Darbus, doing her best to keep the two in the show.
A lively, well produced. smoothly directed fun evening of entertainment with a largely young cast, promising a great future for theatre.
Peter Kemp