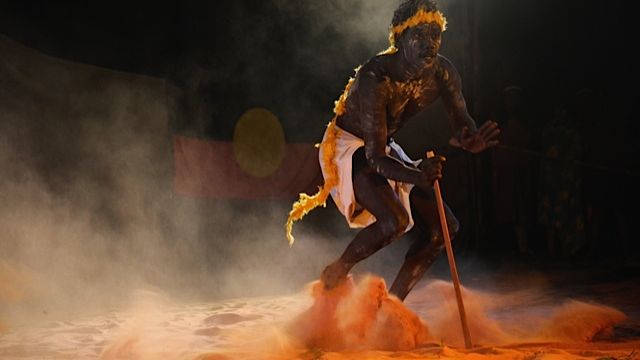 Elcho Island young men adapted traditional dances to embrace the western world’s popular music. They do it with panache!

In this touring show, dance numbers are separated by video sections of elders and dancers who discuss how this popular style emerged. Very few locals own computers, mobile phones, i-pads etc. There are some televisions among the community however, and the young dancers study the dance styles, which they copy and magnify into energetic, cheeky up-tempo sequences that endear them to people all over the world. The first video they made was to music from Zorba the Greek. They now embrace hip-hop, doo-wop, reggae, disco, funk … anything with strong rhythms. Their performance with umbrellas, based on the Gene Kelly version in the Singing in the Rain film had the audience in stitches; as did the Michael Jackson solo number with dinner suit, sparkly glove, and little black hat. It was followed by a host of familiar numbers in dinner suits.

The show is a stunner, but the Brisbane performances are booked out already.