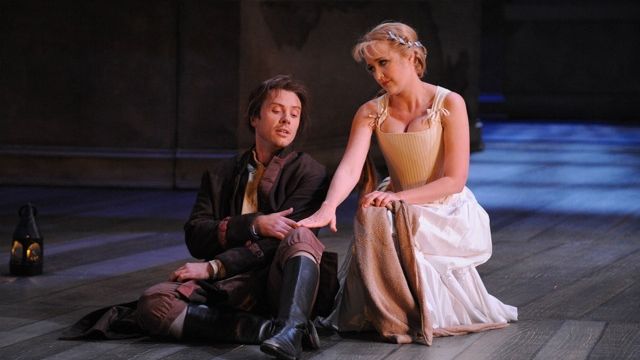 This revival of the late Goran Jarvefelt’s production of Mozart’s Don Giovanni for Opera Australia is a solid effort, one that entertains and delights.

Teddy Tahu Rhodes, as the notorious womaniser Don Giovanni, is a force to be reckoned with. His baritone voice is like liquid chocolate and his tight leather hotpants leave little to the imagination. I mean how many opera singers look sexy in nothing but leather shorts and boots? Tahu Rhodes’ performance is the glue that keeps this production on track and the rest of the cast perform in line with him. Taryn Fiebig’s version of Zerlina particularly sparkles.

Matthew Barclay’s direction of this revival appears to honour and uphold the spirit of the original production. But there are times when an update wouldn’t have gone astray. The scene where Don Giovanni is dragged into the underworld of hell is reminiscent of a small budget version of Michael Jackson’s Thriller video, which is unfortunate as this is one the momentous parts of the production.

Mozart’s music and Lorenzo da Ponte’s libretto of course stand the test of time and are beyond beautiful. Under the guiding hand of conductor Mark Wigglesworth this rendition by the OA orchestra is quite simply exquisite.

Carl Friedrich Oberle’s design and costumes combine to serve the story well and create a strong sense of place and time.

Don Giovanni is a rogue and a scoundrel and this story revolves around love, sex, death and redemption. What more does one need from a night out at the opera?