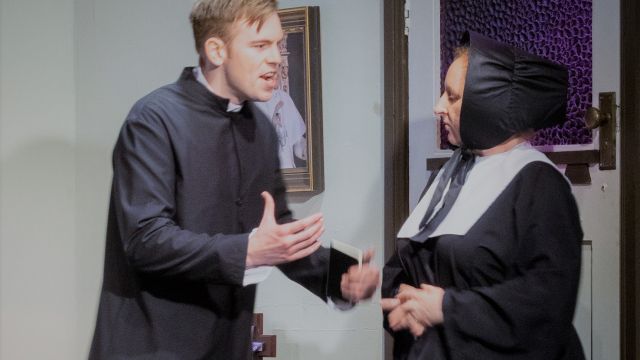 John Patrick Shanley’s 2004 play is set in 1964 in America, but it could have been set here or in the UK, or anywhere in Europe, because the ‘doubts’ it exposes about child abuse had been whispered about and covered up by families and churches and other institutions long before 1964.

Director Carla Moore suggests that the year is symbolic because it marks the introduction of the American Civil Rights Act and Vatican II’s more relaxed image of the Catholic Church – both symbolic of the fact that the 1960s was a time of political and social change.

Doubt is set St. Nicholas Church School in The Bronx. Sister Aloysius is hard, ultra-conservative head nun, a rigid disciplinarian,who doesn’t even approve of the Christmas pageant. Young Sister James is trusting and gentle, but begins to doubt herself when Aloysiusquestions her caring classroom manner. Father Flynn, the young priest, is trying to bring more liberal ideas to the parish. 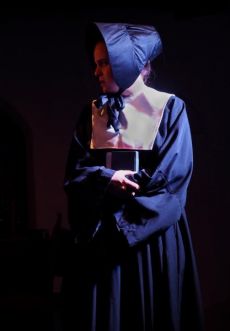 When Aloysius learns from James that Flynn has had a one-to-one meeting with Donald Muller, the first African-American student to be enrolled in the school, her doubts about him are raised. When she confronts Flynn in the presence of Sister James, he denies anything wrong about his actions. Yet doubts are sown in all three, because, in words from Flynn’s sermon: “Doubt can be a bond as powerful and sustaining as certainty”.

Carla Moore’s direction reflects the spikes and stings in the script. The pervasive power of suggestion, accusation and denial is suggested in tight dialogue, uneasy pauses, anxious expressions and stilted gestures. Tension builds, yet does so insidiously, as happens in an institution that always deals with conflict behind closed doors.

Melanie Robinson wears the formidable power of Sister Aloysius with authoritative ease: pursed lips, forbidding frowns, and gestures as controlled as the regime she imposes on her staff. Robinson finds the subtle dimensions Shanley has given this this character, all of them coalescing in her final line: “I have doubts, Sister”. 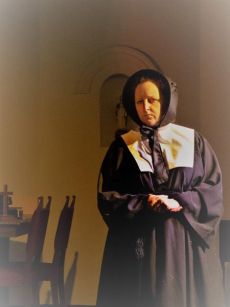 Ben Brighton is youthfully confident as Father Flynn. From the pulpit, his Flynn preaches with lively fervour and assertive eye contact. That assertiveness that changes to defensive defiance as he faces Aloysius’s barbed insinuations, and boyish self-doubt in a moving scene with Sister James.

Sudanese HSC student Susan Sogora transforms to a forty-year old mother in the role of Mrs Muller, whom Aloysius confronts about her son’s relationship with Flynn. Sogora shows her understanding of Muller’s rising indignation in a performance beyond her years and experience.

Moore’s set focuses her production in front of two stained glass windows that back-light the stage. Sister Aloysius’s desk forms a barricade that intimidates James but encourages Flynn. The ‘cloisters’ of the schoolgrounds are cloaked in ivy, and a rose garden tended by Aloysius suggests a softer side to her disposition, where doubts about her actions may haunt her.

Doubt has lost none of the award-winning potency that took it from the stage to the screen – and to this thought-provoking production.