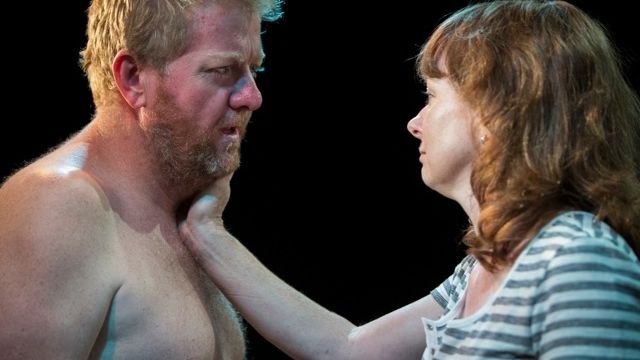 This is a difficult evening to write about without spoiling the experience for a potential audience member (i.e. you, the reader). There’s mystery and confusion about the characters and their motives, the sequence of events, the likely outcome, even the author’s overall purpose. This critic had a very good time trying to fit all the pieces together as they spilled onto the stage. He would hate to spoil things for you.

So — carefully, then — Duncan Graham’s splendid 80-minute Australian drama is a scattered puzzle waiting to be assembled as the performance unfolds. Dreams in White is about assumptions and reality, dreams and nightmares, horror and double-dealing.

The play, according to the Griffin’s splendid program that includes the complete text published by Currency Press, is “inspired by true events”, the disappearance in Melbourne of a wealthy property developer. 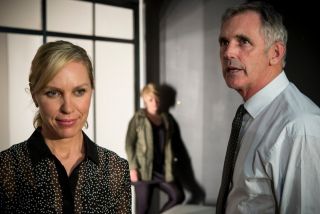 An excellent cast of five shares the 10 main characters with no costume or makeup changes, so it takes some sorting to get who is who. The action is scrambled, with scenes occurring deliberately out of sequence. Characters can switch in an instant. “How do you know what’s going on in somebody’s head?” a baffled wife asks her psychiatrist.

Under expert direction by Tanya Goldberg, there are powerful, committed performances from all concerned. Mandy McElhinney and Steve Rodgers mainly play a raucous working class couple; Lucy Bell and Andrew McFarlane mainly play a middle class pairing, at odds with themselves and each other. Sara West is touching as a young girl lost in a sea of adult deception.

There are creepy sounds and music from composer Kelly Ryall. Multiple mobile phones ring live and often, exactly on cue.