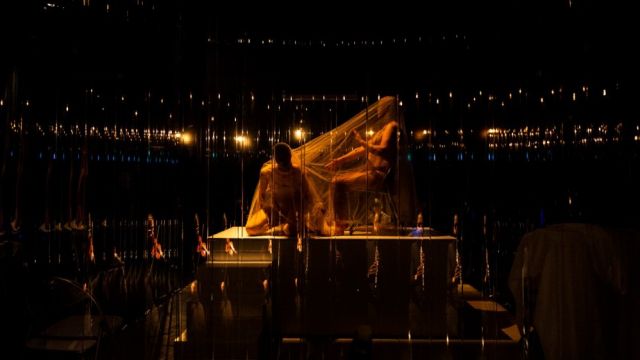 Dybbuks is an overwhelming aural and visual experience.  It is difficult to describe because to do so would likely be reductive and because it works – if you allow it –directly on the emotions, bypassing reason or ‘narrative’.  It is more performance art than theatre, more ritual as theatre.  It relies on certain Jewish rituals, but you do not need to be Jewish or know much about Jewish beliefs to be affected by it.  Indeed, the emotions conveyed, or represented, here are, or become in the course of the performance, universal because it is about desire and the limits of desire and grief and the limits of grief.

Its basis – or inspiration – is the dybbuk – a being which in Yiddish mythology is an ‘unresolved soul who seeks to find form through living bodies’.  But note the plural of the title: there is more than one here.  This is not The Dybbuk, also known as Between Two Worlds, the famous and enduring play by S Ansky, the play that is the ‘jewel of the Yiddish theatre’.  But it is unmistakeably resonant with that work, first because a dybbuk is per se caught between two worlds, but also it is one in which the woman, Leah, is the object, as it were, the site of contention, the body possessed by her dead beloved.  Dybbuks in its way overturns that, refocussing it, giving women agency and making women’s bodies and desires the subject.

There is the death of a man which his lover won’t or can’t accept.  We see shrouded figures so intertwined they might be one – and the visual reference here to mourning statuary is unmistakeable.  The woman’s desire is so fierce that it possesses her as she wishes to possess her love; she desperately clings as if doing so will render him alive; she merges with, she makes love with, what is gone…  It is a refusal to accept death.  Here the lovers’ lament is created from outside them by voices (Johnny Carr and Katherine Tonkin) eerily filling the Theatre Works high cavern.  They are counterpointed by a Jewish women’s choir, led by Tomi Kalinski, flanking a central, transparent and glowing curtained box.  This choir of middle-aged women, their demeanour suggesting experience and acceptance, are all in black; they illuminate and counterpoint what we see with ululations, with a lullaby and with fragments of the Kaddish, the Jewish prayer for the dead.

Then there is a beautiful young woman (Lauren Langlois, who is a dancer) preparing for a Mikveh, the women’s ritual bath, attended by a faceless older woman (Yoni Prior) who performs the immutable ritual of the obsessively detailed cleansing and inspections before the bath, since no fragment of ‘impurity’ should be left to contaminate the woman’s body.  The choir becomes a procession of water bearers, one after another, filling the bath…  The young woman is passive, submitting her naked body to be assisted into the bath.  But afterward, after the three immersions of this ritual cleansing, and the donning of spotless clothing, desire persists: the woman is still vulnerable to a dybbuk – and it is heartbreaking and awful to see this vulnerable body possessed…

Later, the choir become mourners at a grave, placing stones as is the custom, then leaving – and a hunched and black clad figure (Jenny Barnes) – a dybbuk - circles the gave alone, bent in spasms of physical pain, howling in protest that the beloved is gone, gone and the dybbuk is alone… alone… alone.

Dybbuks is the result of the work of many collaborators, principally director Samara Hersch, whose inspiration this is, and her lighting and set designer and dramaturg Paul Jackson.  Ms Hersch says that what we see is the result of a long conversation between these two.  The text - an important but almost secondary element – is by Ms Hersch, Karen Sibbing, Johnny Carr and Ira Brand.  The composer and sound designer is Max Lyandvert, with Tamara Saulwick as his dramaturg, and the musicians are Carolyn Schofield (electronics), Lizzy Welsh (violin) and Aviva Endean (clarinet).  The costumes are designed by Shio Otani, assisted by Anna Pontelandolfo.  The work of all these people, including the choir, comes together in a seamless, integrated way to create a layered work of penetrating intensity.

At the end, after applause that is as much awed as admiring, the space is suddenly quiet but continuing somehow to reverberate.  And much of the audience do not leave.  Many are not even discussing their feelings with their neighbour.  They are simply still, some speechless, their minds, bodies and emotions still resonating with what they have seen and heard.  This is, quite literally, an extraordinary work.