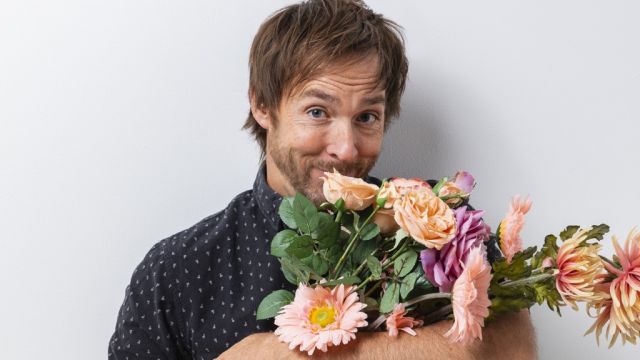 Eddie Ifft’s Walking on Eggshells is not for the politically correct- the very title should prepare the audience for a precarious ride through difficult conversations and some funny situations.

This fast-talking comic presents an hour-long rollercoaster of stories and has an ability to be sarcastic and perceptive at the same time. His wife, marriage and having a child are the main focus of his stories. There are some great anecdotes about the struggles of being married and societal expectations of such, as well as of being a father. The ‘attempting to get his child in the car seat’ story was a particular laugh out loud moment, especially for parents in the audience.

Whilst most of his show is quite funny and relatable, he relies too heavily on constant swearing, which became tedious over the hour. On opening night it also felt at times that he was struggling to maintain his thread; becoming distracted by an audience member leaving to use the bathroom, the noise of nearby rides and music. Ifft also openly expressed his obvious frustration with the performing space. In his defence, the Factory is not a good venue for his comedic style- this requires an intimate setting, whereas it felt like we were in a gymnasium watching a basketball game in a huge space on bleachers.

Obviously, comedy should be able to make comment on all social issues, but for this reviewer, some content was a little lacklustre in its development and fluency. Ifft’s attempt to address and joke about the #MeToo campaign appeared isolated and confusing, not streamlining with the rest of the show. This left the audience uncertain of his stance and in this reviewer’s opinion, risked trivialising a ground-breaking movement.

Hopefully, Ifft will find his momentum and settle into the venue as time passes.