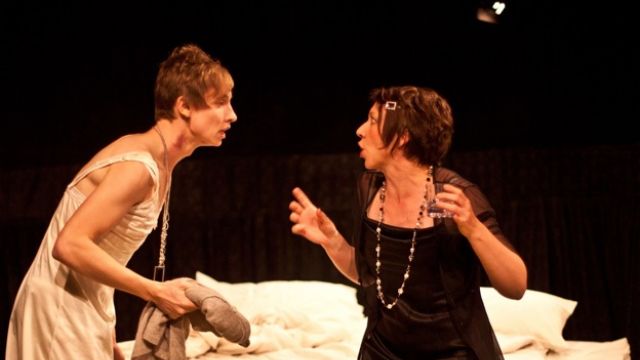 That Face looks at the seemingly modern phenomenon of children caring for parents and the particular dysfunction that brings to family relationships.

Henry (Matt Crook) has dropped out of high school to care for his manipulative mother, Martha (Tamara Lee). While he does his best, she often persuades him to join him drinking and then they wind up sharing a bed. At one point she destroys his clothes, leaving him nothing to wear but her dressing gown.

Henry’s careful balancing act comes apart when his sister Mia (Elleni Karagiannidis) is suspended after a high school initiation gone wrong and their remarried father (John Maurice) returns to clean up the mess. 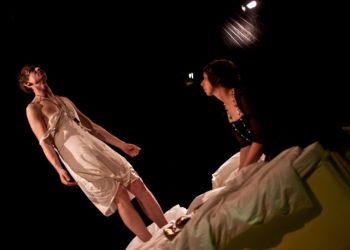 Matt Crook, who won the 2010 Adelaide Critics’ Circle ‘Emerging Artist’ award, stands out, bringing an innocent vulnerability to Henry who is in one sense noble but also painfully human. As Henry’s efforts to hold his world together fail, Crook’s captivating performance carries most of the emotional weight of this piece.

Anyone who cared for their parents growing up will either find the play a validation of their experience or an unsettling confrontation.

I knew I was in for a rough night when downstage centre is a person tied up and weeping under a blackhood, Abu Ghraib-style.

Fifty years from now, academics will look back to the early century and say, “Oh, that was so Abu Ghraib.”

Initially, I was relieved that the action wasn’t in a prison under war conditions, but felt even more sickened that our victim was subject to bullying in a hazing ritual gone mad in a girls’ dorm.

But that’s just the beginning of Stenham’s investigations into the human psyche. We next see a young man and an older woman in bed – the latter is pleading and apologising about the preceding unseen action. Director Corey McMahon says in the program notes – “There is a bond between the two that, from the outsider’s perspective, might seem almost perverse. It is a deep love and friendship that is not sexual, but certainly pushes the boundaries of what we would call normal.” Are you kidding?  Pardon me for reading between the lines, but I could be forgiven for thinking that this scene was post-coital. Did I also misunderstand later when Martha strips Henry’s bathrobe to his waist and lasciviously admires his adolescent breast? It’s got not much to do with love, but plenty with addiction. Martha completely manipulates her son, Henry, into serving her selfish desires, which are fueled by alcohol and prescription drugs. He is virtually enslaved by his need to have a mother at any cost. Henry’s sister, Mia, has freed herself from her mother, but is maladjusted enough to participate in the aforementioned torture.

Yet Mia is merely an accomplice to her slightly elder classmate, Izzy. Kate Roxby played her with such menace that I disliked Izzy from the beginning.  Simply incorrigible and immoral, Roxby’s Izzy was a truly disgusting character matching Martha in manipulative power, both coercive and in flirtation.

The play revolves around the making and breaking of the relationship between Martha and Henry. Tamara Lee is a formidable Martha, providing a chameleon-like performance to match Martha’s many facets.  Matt Crook made sure Henry was beautiful and pathetic, caring, sensible and weak – a heartfelt performance. Elleni Karagiannidis provided similar complexity for Mia.

And then there’s Hugh, the father and ex-husband who abandoned the family for the OS job experience. The hazing incident has brought him back from Hong Kong and things must now be resolved. John Maurice executes this role with firm resolve and plays a most realand grounded persona.

While the dysfunctionality of the relationships is over-heightened, Polly Stenham excels at contriving nonetheless plausible experiences and imparts her characters with fascinating exchanges of mercurial hierarchical combativeness.

The final tableau had an eerie similarity to the penultimate scenes of A Streetcar Named Desire.

This is director Corey McMahon’s final production with the company he helped found – five.point.one. McMahon’s direction has always been purposeful and tight and he blocked his players to heighten dramatic tension with body language. That Face is completely consistent with his modus operandi and the disturbing and distressing dramatic situations he seems to be drawn to.  Designer Cassandra Backler provided a seventh character with a large raked-angled disheveled bed.  Together with lighting designer Ben Flett, and sound designer and composer Christian Paterson, McMahon heightened the tension and engineered cleverly swift scene changes.  However, shrillness could not overcome some of Stenham’s repetitive dialogue.

I don’t know five.point.one’s next move but thanks for providing high quality alternative theatre over the last three years on a shoestring.