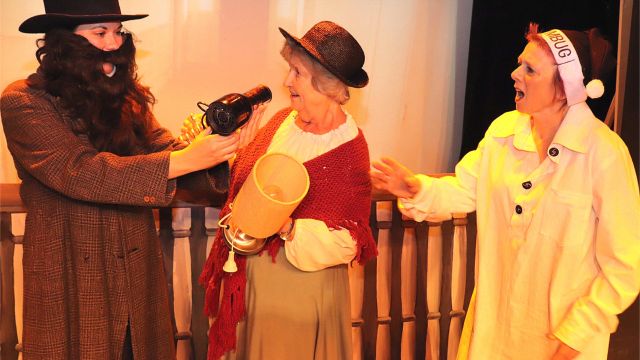 The Farndale Avenue Housing Estate Townswomen’s Guild Dramatic Society (FAHETGDS) series, is a collection of ten plays, all featuring the ladies of a drama club as they struggle to put on a classic play. In Stirling Player’s latest production, in an appropriate choice for the season. The ladies tackle A Christmas Carol.

ome of the best-known shows in current rotation to feature Coarse Acting (check out Michael Green’s book The Art of Coarse Acting if you would like a treat of a read). The Farndale ladies bumble and stumble their way through the production with misplaced lines, mistimed entrances, falling scenery and terrible casting.

The ‘real life’ cast all play at least two roles - playing both the member of the FAHETGDS, and their role or roles in the show within the show. Jenny Wrenn, in only her second stage role, was a late edition to the cast, but belies her short rehearsal time with a well-presented version of club chairwoman Mrs Reece, who is A Christmas Carol’s narrator. She creates a believable rivalry with Lis Hoffman’s Thelma, playing, as Thelma does in every show, the leading role - in this case Ebeneezer Scrooge.

Peter Neaves is very likeable as FAHETGDS Stage Manager Gordon, also playing 5 roles in A Christmas Carol, using “the acting style of someone who is a stage manager”. The only other male in the show was the show’s actual stage manager, who performed double duty with a cameo as the Vicar. 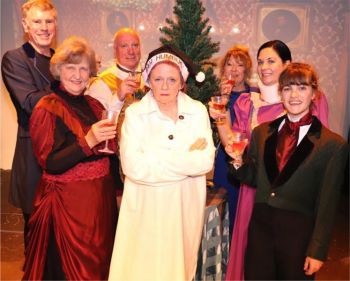 The excellent projections were almost too good for the rather beleaguered FAHETGDS, operated by Ian Wilson who also handled the audio. John Woolrych designed a lighting plot that worked well. Carole Wilson’s set design served the show well, with some very amusing set pieces by Ursula Kotara. The FAHETGDS ladies might wear costumes “that almost look like real clothes”, but the costumes were quite gorgeous as designed by Alison Goodwin and Fran Gordon.

Funny as it is, a bit more pace, and even greater differentiation between the members of the FAHETGDS and the roles they play - especially vocally - would have made this show really soar

The Farndale Avenue Housing Estate Townswomen’s Guild Dramatic Society’s Production of A Christmas Carolis good fun, a great choice for those involved in theatre, and a great morale booster for those who have suffered through too much sub-par theatre. The audience had a great time with this little holiday treat.