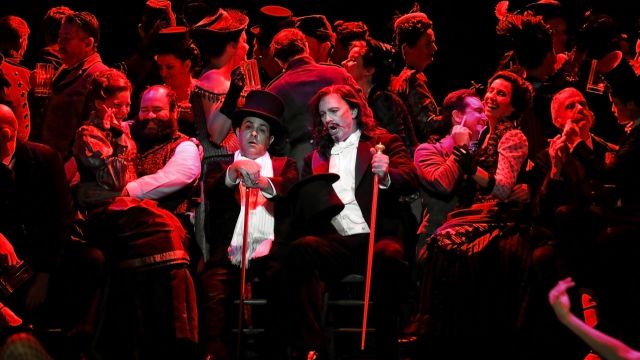 This is an extraordinary production of an opera which might not boast the best known tunes in the genre, but jolts the senses with musical lighting. The first act is rather grim. Faust, weary of life, is stopped from taking his own life by the light of dawn and the appearance of Satan (Mephistopheles). He does the famous deal with the devil, where his hedonistic demands will only be met if he agrees to hand over his soul.

Lest you think that the three hours of French opera is going to be a snoozy experience, the mood changes immediately. The brooding start gives way to a kaleidoscope of colour. When the curtain rises for the second act the audience is lavished with the vibrant interior of Cabaret L’Enfer. In come the luscious and famous French dancing girls. 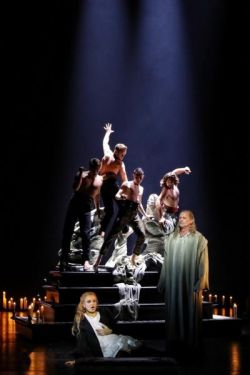 This was the first of a number of breathtaking scene changes. The set, designed by Charles Edwards, is magnificent. The most striking vision is where the lighting design of Paule Constable makes it almost impossible to decipher if an object on the stage is a statue or a person.

Opera Australia assembled a first class roster of international singers in the lead roles. In the title role of Faust is Italian tenor Ivan Magri. His rendition of the aria Salut! Demeaure chaste et pure (which is all about angels, beauty and love) was delicious. The woman he bestows his affection on is Marguerite - portrayed by Russian soprano Irina Lungu. She sparkled in her best known aria The Jewel Song, where she tries on a trove of diamonds displayed ominously in a small casket.

The best role in any drama is often the villain and in this opera based on the work of Goethe, the villain has characteristics of wit, charm and evil. In the shoes of Mephistopheles was the giant Teddy Tahu Rhodes. His booming voice and commanding stage presence were charismatic. At one point he appeared on stage in a glamourous dress with the juxtaposition of his wig, height, dress and tattoos quite striking.

As the opera drew to its conclusion there were a few moments where I was scratching my head at what was going on with the direction. What was the bizarre mixture of costumes – from all corners of the earth - that surrounded Mephistopheles and was the sex romp in one brief scene entirely necessary?

The whole opera was swept along by the brilliant orchestra under the baton of Lorenzo Passerini. I very much enjoyed turning around and watching him conduct on the TV screen, which is broadcast for the benefit of the cast. A nice final touch was the chorus entering the audience to sing from the highest balcony seats on the left and right of the theatre. Mr Passerini had to conduct whilst craning his neck to be seen by the cast. This was opera stretched to the limit. 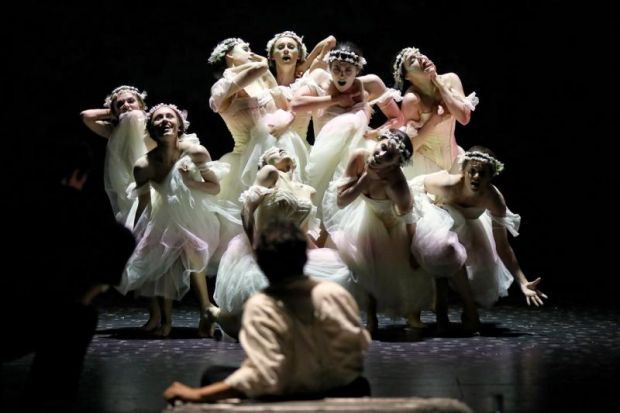