The Feather in the Web 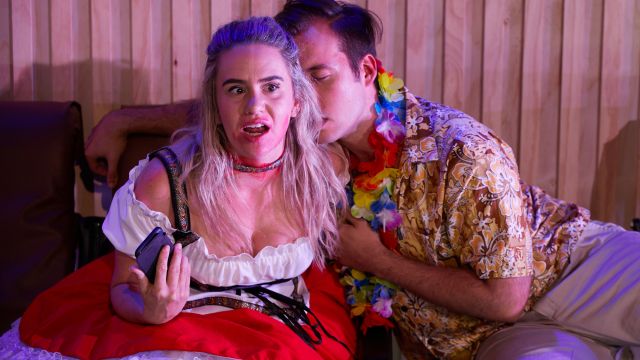 At first, The Feather in the Web seems as if it might be a series of comedy sketches: two prattling suburban ladies get cream cake right in the moosh.  Funny, yes, but… But that’s deliberately misleading – as is much that follows.  Playwright Nick Coyle sets up a narrative that keeps us wrong-footed.  It’s consistently funny and surprising and satiric, but it becomes increasingly disturbing, and it ends in an unexpected but convincing place.

Brynna Lowen’s set is all-purpose functional and works perfectly – helped enormously by Clare Springett’s lighting that provides drama, alienation, the supernatural and the passage of time – completely in keeping with the mode and tone of the text.

That text is a series of tight, absurdist scenes in which we follow the journey of Kimberly, a young woman who seems in search of somewhere to belong – or just to fit in.  She is driven – if she is driven by anything – and so much the worse for her - by love, a love that we see is misplaced and that makes us both despair and care for her. 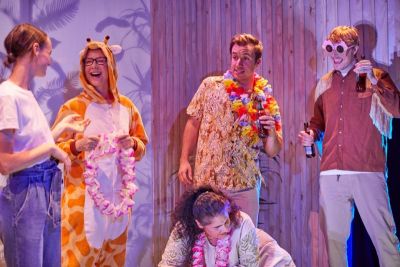 Kimberly is played by Michelle Brasier in a beautifully controlled, riveting performance.  Mr Coyle never ‘explains’ Kimberly; he never tells us where she has come from; he provides no backstory, no psychology.  Often a stolid block with a bewildered expression, it is as if she has just popped into this world and is trying and mostly failing to understand it.  Perhaps she is an alien, perhaps she is an elf, or perhaps she is just a lost but very literal minded young woman with Asperger’s Syndrome.  Director Declan Greene never softens the contradictions or allows ‘psychology’ to make things palatable.  He and the cast appear to ‘get’ Mr Coyle’s intentions and realise them with panache.

Kimberly is as much a device as she is the subject.  As she takes us from scene to scene, she is not always the same character.  She is a chameleon, an innocent, or a sulky teen devoid of social skills, or Harpo Marx, the Id rampant, or a parlour terrorist, or an idiot savant, or she’s ridiculous - a hopeless, pathetic romantic.  And while we might laugh, she never does.  Her presence and her interventions allow Mr Coyle to send up and skewer the mores of our contemporary world via the other characters’ responses to her and their blatant but unaware ridiculousness, self-absorption, shallowness, snobbishness and cruelty. 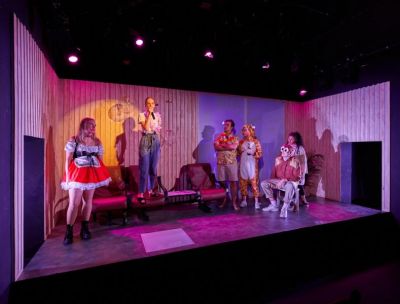 At first (one of those comedy sketches) Kimberly is sent (but by whom?) to a psychiatrist (Georgina Naidu) who rabbits on with some complacent nonsense before being revealed as a fraud.  Then there’s an outrageous Make Up Counter Guy (gloriously over the top Patrick Durnan Silva) who gets what he deserves.  But Kimberly finds an objective when she appears – we’ve no idea why – at an engagement party for handsome narcissist Miles (George Lingard) and winsome airhead Lily (a touching, painfully awkward Emily Milledge).   Miles’ mother (brisk and brusque Belinda McClory) naturally assumes Kimberly, strangely in blue overalls, to be wait staff from some agency.  If there is a turning point, this is it.  We can see Miles is a waste of space (Mr Lingard with great restraint never suggests he is anything else), but it seems Kimberly cannot.  As an indication of her obedient desperation, she changes costume and appears as some kind of Swiss milkmaid, the price tag still hanging off the silly short skirt.  Obsessed with Miles, and willing to do anything to please him, she becomes lonely Lily’s friend.  The irony here is painful.  But if Kimberly, trapped in her idée fixe can only escape by change, by learning about the world, she might also miss what is right in front of her and that – in yet another unexpected twist – leaves us suddenly struck by the waste and sadness of the world.

The Feather in the Web is a wholly original comedy that constantly avoids the predictable.  It’s a piece in which Nick Coyle is quite clear in what he wants to say and how he wants to say it.  Declan Greene and the cast do him impressive justice.