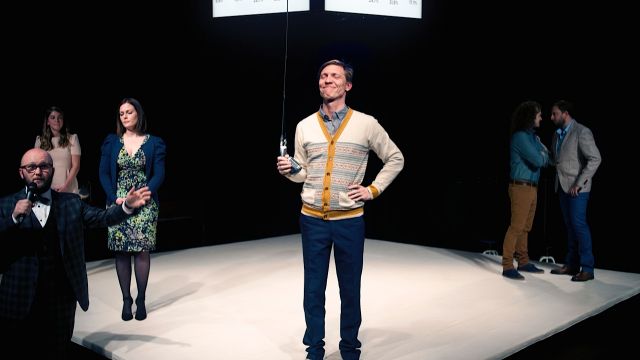 Five contenders in bathrobes. A ringmaster with stock-standard bow tie and microphone. The stage is set - but this competition will hinge entirely on talking, thinking, persuasion, manipulation.

Subverting an audience's expectations can be a risky enterprise, but the minds behind Fight Night have done it, and delivered a presentation that is as gripping and thrilling as it is clever and sly.

Being handed a remote-controlled electronic voting system upon entrance to the theatre is your first indication that Fight Night will not be your average piece of theatre. By the end, chances are, a portion of the audience will have spent time sitting on the stage, then been asked to leave early.

Our hidden preferences, prejudices, and propensity for being persuaded…Thanks to the power of technology, and the imagination of Fight Night's creators, these traits are on display for all to see, with a minimum of noise or fuss - until, perhaps, the moment when the results regularly arrive, and we may all feel the need to express laughter, surprise, shock...

As with other forms of democracy, anonymity eases the process of declaration and involvement, but the way it is applied here, you will likely be confronted more than once with some challenging realisations and difficult truths.

Is it purely coincidence that Fight Night arrives at the Adelaide Festival right when the South Australian election campaign reaches its peak? If so, it's a most fortunate bit of timing. Get along to see this show; you may never look at the process of voting in quite the same way again...