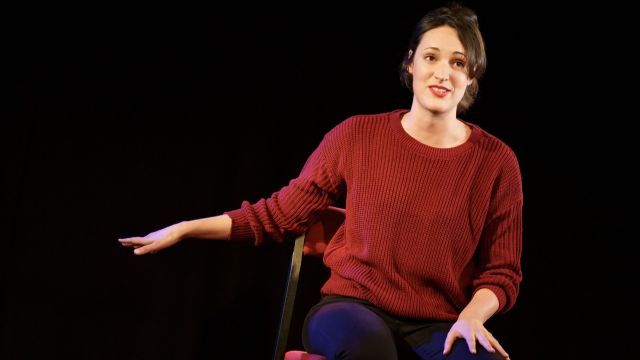 This is the Ur-Fleabag, where it all began in 2013, the one woman 80-minute stage show performed at the Edinburgh Fringe by the woman who wrote it.  That first production led to a string of awards and then to her much amplified television adaptation Fleabag Series I & II.  Plus her adaptation of the Villanelle novels by Luke Jennings that became Killing Eve Series I, plus a punch-up draft on the latest Bond movie and now a contract with Amazon for more.  This ex-RADA student, who didn’t like the roles she was being offered and so wrote her own show, is on a roll.

Melbourne audiences have seen the stage Fleabag back in 2018, but with Maddie Rice in the eponymous role.  Ms Waller-Bridge being too busy writing, she and her director and essential collaborator, Vicky Jones, selected Ms Rice.  It was a cunning choice.  Not only is Ms Rice a very talented actress, she is very different in manner and appearance from Ms Waller-Bridge.  The latter is tall, horsey and has a sort of ‘head girl’ upper class manner (which makes the material all the more ‘shocking’) while Ms Rice is softer and sweeter, more obviously sympathetic, as it were.  But the two women being clearly different means no grounds for odious comparisons.  What we see now, however, in this National Theatre Live presentation, is Ms Waller-Bridge back in the role for a brief season at the Wyndham Theatre, London, this year.

For those who’ve seen the television adaptation, the stage show provides the story and the characters for Series I in a kind of sketch form.  For those who’ve not seen the television adaptation, Fleabag on stage is an 80-minute monologue from a contemporary young woman who is remarkably frank and – to quote my review from 2018 – self-destructive, her own worst enemy, stupidly – or desperately – promiscuous and who can be a heartless bitch. To see Ms Waller-Bridge again, after the television version of Fleabag, here alone on stage, no costume changes, with just a bar stool and with minimal (but effective) lighting changes, under the no-escape-no-excuses National Theatre Live cameras, you see what a superb actor and comedienne she is in addition to her writing talents.  There are a few pre-recorded voices but overall, it’s just her.  Perhaps a third of the ‘content’ or the storytelling is conveyed via facial expressions, often directed straight to the audience, and small changes of posture.  The Companion remarked, ‘What superb control – she doesn’t waste a second.’  The term ‘tour de force’ is apt.

Ms Waller-Bridge also creates and presents to us – with clarity and economy – her best friend Boo, a prospective employer, an on-again-off-again boyfriend, various ‘bad sex’ one-night stands, her uptight sister, her now-dead big-breasted mother, her phlegmatic father, her father’s girlfriend, an upbeat Cockney customer at her café and a guinea pig.

But the characteristics of the text – which of course Ms Waller-Bridge understands perfectly as a performer – are the sharp, abrupt juxtapositions of the laugh-out-loud funny with brutally frank descriptions and revelations (particularly about sex), the sudden tangents that can leave you floundering for a moment, and the very moving sadness, guilt and self-loathing that underlies it all.  Her final confession (if that’s the word) is devastating.  Fleabag adds that many girls ‘feel like this’ and, apparently, many girls have said to Ms Waller-Bridge, ‘Fleabag is me’.  Indeed, at the screening I attended there was much identifiably female laughter – the laughter of recognition.  It’s a disturbing contribution to the #MeToo ‘debate’.  Ms Waller-Bridge in interviews has made two salient revelations.  One is quite obvious: she likes to shock.  And to surprise.  Second, that much of her writing is driven by anger.  See for yourself.