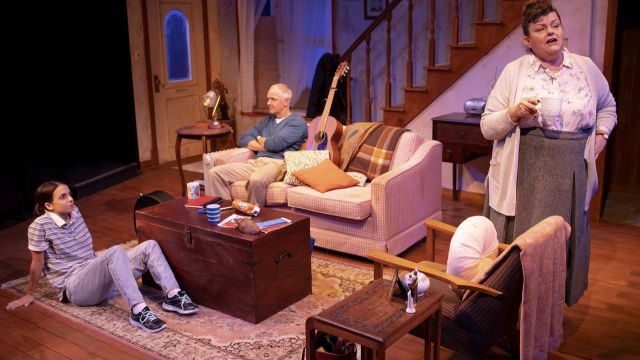 Sister Winnie’s regular Guiness and singalong evening with middle-aged guitarist Stephen is abruptly shattered when 15-year-old Kayleigh hurls a brick through the front window of the nun’s house in the deprived Yorkshire seaside town of Withernsea. There’s nowt so queer as Folk, as the saying goes, and playwright Tom Wells takes pleasure in introducing us to three of the queerest, most mismatched characters ever to share space in the same play.

There’s big-hearted Sister Winnie (Genevieve Lemon), swearing, smoking, drinking her canned Guiness; uncertain, disapproving Stephen (Gerard Carroll) who can’t possibly play his guitar anywhere outside the house; and no-hoper Kayleigh (Libby Asciak) who is pregnant via a boyfriend who’s been recently killed in a motor accident. Fortunately she’s intuitive, can sing like a bird and plays a mean tune on the tin whistle. With seemingly little between them, these three face the 90-minute duration of Folk as distinct individuals and gradually, slowly meet and make a difference. This was noticeable to the first-night audience at the Ensemble, who for the first half of the show withheld their affection. That they recovered, and indeed rent the air with their cheers at the end, is a sure sign of Wells’ writing quality and of the acting chops of this small company.

Significantly, it’s Genevieve Lemon’s contribution that seals the deal: her warmth and commitment is palpable. Who wouldn’t melt before the warmth of her ever-watchful attention? Libby Asciak begins under the enormous constraint of a thick, Northern Yorkshire accent, so dense at times to be hard to penetrate. But she perseveres, winning through with her bonding into this surrogate family. And Gerard Carroll brings off a coup by gaining, in the final scene, a degree of self-improvement.

Directed by Terence O’Connell, on a splendidly warm setting by Hugh O’Connor (featuring lots of little Catholic statues and whatnots), this charming little play proves a winner in the end.