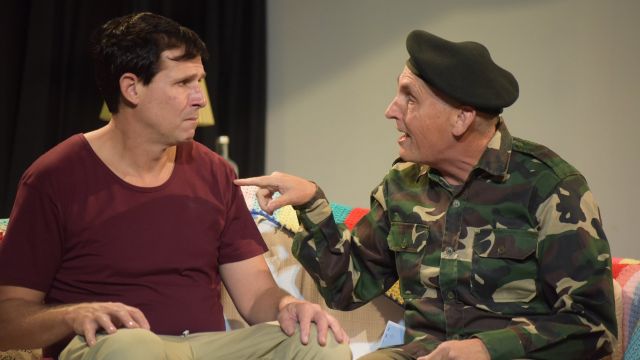 Set in a resort–style fishing lodge in rural Georgia, this comedy uses humour to make the message about racial discrimination – or any form of discrimination – even more potent. Charlie is brought to stay for a few days to allow him to mentally recover and his friend tells the hostess that Charlie cannot speak or understand English. You can only imagine what people say in front of him as they believe he can’t understand them. We follow an interesting tale of personal relationships, and even the coming of the Ku Klux Klan, in an extremely comic way.

The one room location satisfied all requirements, providing good space to move, which director Gary Kliger made good use of with his cast of seven. The cast was uniformly good, with Troy Bullock great as the “foreigner” Charlie Baker when pretending to speak and act off the planet. Steve Tonks was S/Sgt Froggy Leseur, who brings Charlie to the lodge. With her great American accent, Debra Chalmers filled the crucial pivotal role of Betty Meeks very well indeed. Ellard Simms is the “slow” boy who starts to teach Charlie English. Andrew Townsend became more confident in this role as the play progressed and was very good in later scenes. Joshua Byrd, Kristina Nisova and Brad Oliver completed the team that inter-acted so well in providing a good night’s entertainment.

It is always challenging for an audience when humour is used to present such a serious underlying message on discrimination, how some people are treated, and how they react to the challenges of life. Nash Theatre’s production, under the control of Gary Kliger, is strongly recommended.