Four Dogs and a Bone 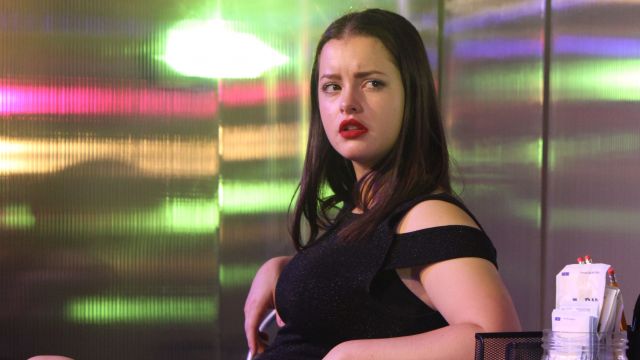 It’s a play about ‘Hollywood’.  The ‘bone’ in question is a low-budget movie already in production.  The ‘dogs’ are four competing and very self-interested parties: the fading lead actress, Collette (Tania Knight), the beset producer, Bradley (Kostas Ilias), the ambitious ingenue (does anyone say ‘ingenue’ anymore?) Brenda (Xanthe Gunner) and the ‘sensitive’ writer, Victor (William Atkinson).  Bradley’s problems, apart from wrangling these people and a painful anal problem, is that it’s a seven-million-dollar movie he must bring in for five.  The completion guarantors are hovering.  He doesn’t like Collette’s performance and the ‘weak’ director is, unfortunately, Bradley best friend.  Collette wants the script rewritten so that she is the lead (although, if she’s not, who is?): she knows this movie could be her last chance to save her career as a lead.  Brenda is simply ruthlessly ambitious – eyes firmly on the prize underneath the naff New Age (‘I chanted for this role’) routines.  And finally, Victor, trying to protect his (autobiographical) script, is prey to all of them. Director Gabriella Rose-Carter says in her program note that she was drawn to this satire by her fear of how real it is.  Well, yes, it’s real enough.  There are myriad stories about cutting corners – and scenes and characters – in under-budgeted or miscast movies, about egomaniac stars demanding rewrites, and about writers – the ‘creatives’ with the least creative control – gritting their teeth and compromising just to get a movie made with their name on it.  (Every good movie is a little miracle.)

So, it’s ‘real’ - but in this 1993 satire, there’s not much story: it’s a situation in which John Patrick Shanley takes revenge on Hollywood by casting a caustic eye on the sort of people who ripped him off and ruined his script.  But, really, there’s not much at stake.  He wisely and cleverly gives us only the sketchiest idea of the movie in progress and it sounds like a dog – but that’s what’s at stake.

The characters may care about the movie, each for her or his reasons, but we aren’t invited to, so we don’t – and nor do we care about these characters.  The text mixes ‘satire’ and attempts at depth, but satire wins, and the characters are types.  We get it that they are narcissistic, whining mediocrities, but all the wit, fun and entertainment is in the extravagant dialogue with its barbed repartee, its cruel insults, its transparent manipulations and lying. Ms Rose-Carter stresses the importance, indeed the priority of the dialogue here, but for some reason her cast all talk fast and without much light and shade.  There’s a difference between pace and rushing and much here is on the one hectic note.  I could hear line after line that could - with a pause, a giggle, a loaded look, some acidic sarcasm - have had us laughing or wincing or simply struck by its insight, but the cast kept gliding over these lines or past them at speed – and, although the characters are all certainly self-absorbed, rarely did they seem to be talking to each other.

Q44 is a small company that deserves more attention and more accolades.  It’s a brave decision for them to mount this difficult play, but they have a penchant for mounting difficult plays and usually the results are excellent.  Perhaps – and I hope so – this one will settle down and cast will relax a little into their characters and find their texture.