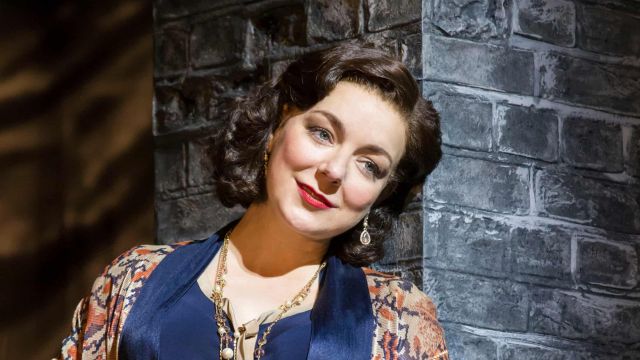 Now we have Sheridan Smith taking the reins and putting her cheeky stamp on Funny Girl and bringing a fresh and unexpected look to the vehicle that made Barbra Streisand a Broadway star in 1964. Smith, the lovable and gusty comic from TVs Two Pints of Lager and a Packet of Crisps, the Cilla bio-pic, and Legally Blonde, is irrepressible as Ziegfeld Follies vaudeville star Fanny Brice. She mugs, she grimaces, she’s the master of the put-down, but her portrayal is also tinged with pathos and is heart-breakingly real. It’s a brilliant and honest performance that was captured (with fabulous close-ups) in the final week of the UK tour at the Manchester Palace Theatre, in August 2017.

We know she can sing, just listen to the cast recording of Legally Blonde, and Jule Styne’s classic score gives her a full range of emotions to play. “People” is a small gem: quiet and full of longing, whereas “Don’t Rain On my Parade” has guts and defiance. She gets full comic mileage out of being pregnant with “His Love Makes Me Beautiful,” and as a Jewish soldier in “Rat-Tat-Tat-Tat,” but reserves the tears for an emotional finale with “Funny Girl,” a song that was dropped from the original production.

Isabel Lennart’s story was threadbare in 1964 (a gawky kid becomes a star but loses her husband when he can’t play second-fiddle to her fame), but with some judicious rewriting by Harvey Feinstein this version, directed by Michael Mayer, removes a lot of the dross, drops “Find Yourself a Man” and repositions “I Taught Her Everything” to become a second-act showstopper for Rachel Izen (Mrs Brice) and Joshua Lay (Eddie Ryan).

It’s great to see Darius Campbell as the reckless gambler Nick Arnstein - a leading man who can sing and dance and do it with charisma. His reinstated “A Temporary Arrangement” (cut because Sidney Chaplin couldn’t sing it) works well with a quartet of guys, but it’s Smith whose talent is deservedly splashed across this marquee. When she declares in her first number “I’m the Greatest Star”, you believe her, and what’s more she goes on to prove it time and time again.

Best Actresses in a Musical don’t come better than this. She well and truly deserved her Evening Standard Award!