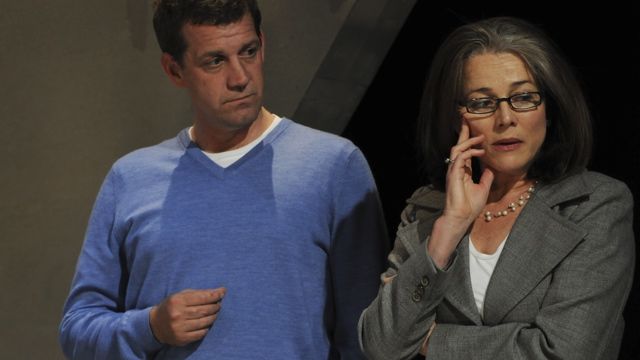 Neil Armfield’s production of David Hare's latest play Gethsemane represents outgoing Belvoir Street Artistic Director Armfield's fourth production of a Hare play in what has been a long and successful collaboration.
The Sydney opening of Gethsemane had a particular relevance starting, as it did, on the cusp of a scandal involving a leading Labor state politician. John Della Bosca who had hopes of being the next premier was 'outed' by his mistress for having an extra-marital affair. The revelations that came out in a daily newspaper included the couple having sessions in his parliamentary office.
At the centre of Hare's latest drama is Labor Home Secretary Meredith Guest (Sarah Peirse) and her rebellious teenage daughter, Suzette (Emily Barclay). Meredith's position is under fire with scandal surrounding her entrepreneur husband who faces criminal charges. Her relationship with her daughter is difficult, and she has a gut feeling that Suzette has got herself into some sort of trouble. Meredith asks Suzette's former teacher Lori Drysdale (Claire Jones), whom Suzette had a strong rapport with, to have a talk with her. The revelations that come out of the talk are worse than Meredith could have possibly imagined.
Neil Armfield's production presents a very tense mother and daughter drama where it hangs in the balance as to whether they are going to get through the crisis. Will Meredith be able to hang on to her brilliant career? Will Suzette grow out of a very difficult and destructive adolescence? Will they finally destroy or accept each other?!
The two leads give strong performances. Emily Barclay, best known previously for a break-out performance in the small budget Aussie feature, 'Suburban Mayhem', gives a very moving performance as the distressed Suzette. Sarah Peirse convinces totally as her very driven career mum. Claire Jones is great as the compassionate peacemaker, Lori.
Brian Thomson's expansive, angular set, and Alan John's subtle score work well.
David Kary