The Good Person of Szechuan 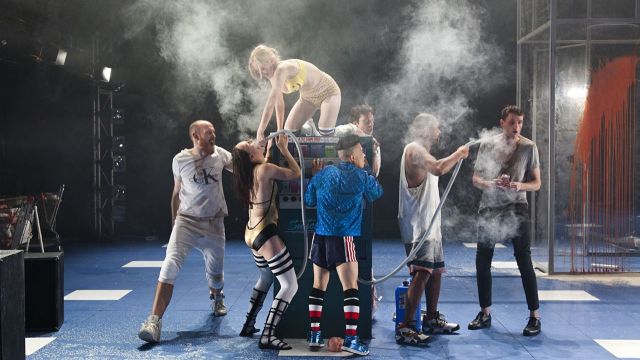 Brecht as current and relevant as ever!

As touted in the media release this production: ‘In the hands of avant-garde Chinese theatre-maker Meng Jinghui, Bertolt Brecht’s morality play about the exploitative power of capitalism will erupt as a cross-cultural, entirely contemporary, theatre experience.’  And yes, riddled with Brechtian irony and highlighting his wisdom, this production is set to fulfill expectations and more.  It is one of those rare shifts in theatre that supersedes much of the rest, a unique and potent show, the type, as audience, we are perpetually on the lookout for.  All creative aspects come together fittingly in the hands of Director Meng Jinghui.

To purge some adjectives first - energetic, invigorating, exciting, vital, relevant, probing, punchy, edgy, visceral, loud and in-your-face.  Whatever! This production of The Good Person of Szechuan is a long, but highly charged, classy piece of solid and impressive, smartly produced theatre.  It is full of ‘eye candy’ and keeps one engaged and thinking.

Good Person of Szechuan is about Shen Te (Moira Finucane), a prostitute who, although given a leg up by ‘The Gods’, is perpetually in danger of being exploited by the unscrupulous in an underworld of seething poverty.  To protect herself and her unborn child, and, ultimately, to thrive, she takes on a second persona of a male cousin Shui Ta who manages to flourish in a grimy cruel world of rancid poverty and drug trafficking. This production clearly poses the focal question - is it possible to be wholly good in cultures that are, at heart or perhaps heartlessly, driven by economics?  At the same time we are reminded that lives in a community intertwine and influence outcomes for all.

And yes Brecht’s ‘alienation effect’ is honored.  Also, paradoxically, is his perceptive eye for sentimentality and our tendency to yearn for a happy ending.  We are denied catharsis, but its possibility is signposted a number of times throughout.   And this serves to heighten the desire to be embroiled in, of all things, a Cinderella story.

The casting is nothing short of inspired. The actors work evenly as a swift and smooth team on a vast set (Marg Horwell). Moira Finucaine plays the male and female sides of the same coin to a T without being superfluous to depict gender distinction.  Aljin Abella delights with his endearing characterization of Shu Fu through feisty physicality and light humorous touches.  The three sharp, idiosyncratic, yet lazy gods are played by Genevieve Giuffre, Emily Milledge and Genevieve Morris, who also double as characters in the community.  Daniel Frederiksen embodies a self-serving sleaze Yang Sun with convincing credibility.

The finely integrated musical score is adroitly pitched (pardon the pun).  It is partly DJ’ed and partly played live from a booth on the floor by THE SWEATS/Pete Goodwin.  Thus, it, underpins a sense of immediacy and innovative freshness - complementing the radical imagery and wacky buffoonery throughout.

Get a ticket now – you will kick yourself if you miss it!