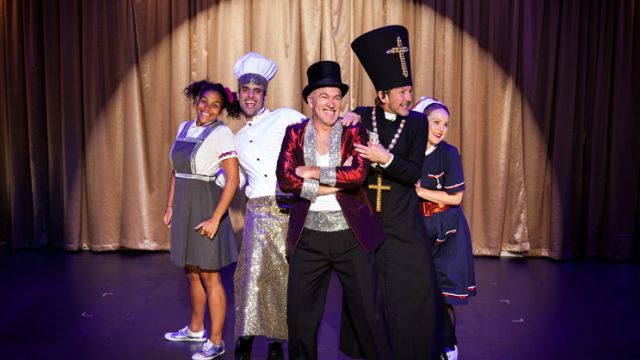 This work, inspired by Nikolai Gogol’s exploration of fraudulent behavior as depicted in his play The Government Inspector, bears little resemblance to the original. It could be described as a work in three acts. But don’t let that put you off, it is short and crisp and there is no interval.

In Act One everything falls into strange disarray through a number of over the top events that are hilariously presented in a sort of matter-of-fact, yet, theatrical manner by a team of actors in search of a  …. solution.

In Act Two a risible attempt to salvage the situation results in the farcical employing of a much-lauded Avant Guard theatre maker from Russia.  Subsequently a somewhat neurotic and kooky image of theatre making is most amusingly portrayed whilst some of theatre’s sacred cows are shamelessly lampooned.

And then the shorter, but deliciously lit (Paul Jackson), third act ‘a short musical by Stefan Gregory’, with stunning choreography for actors by Lucy Guerin, amalgamates with panache and charm.

Well it all goes something like that – and is a kind of well-managed intricately performed mania that has one brimming with laughter.

Everything old is new again and anything seems to be up for grabs.  Australian theatre making is satirized. So is our reverence for obscure and ambiguous imported ‘Festival’ productions.  The actors parody themselves. And this, as we heard in the talk after the show (Tuesday 11 March), can be a challenging and confronting enterprise.  Even the washing machines that comprise one of the sets had been seen on a Melbourne mainstage a few short years ago. This work is loaded with delicious absurdities such as actor Greg Stone not being able to find his pants to take the stage as The Governor/Emperor - wearing new clothes.  This could be a metaphor for the risk all actors and creatives were taking on pulling such a chancy flight of fantasy as to entertain an audience without actually having a play.

Zarah Newman stuns with the beautiful characterization of a Hispanic cleaning lady and Gareth Davies creates an hysterically funny character of a Russian Director.  Every member of the ensemble shines in this enterprise.

The talk after the show, mainly facilitated it appeared for school audiences, was very informative.  Marion Potts spoke at length about the situation Malthouse found itself in after losing rights they were sure they had to The Philadelphia Story.  All actors talked about their work in a way that highlights their courage, commitment and the capacity to collaborate at a very high-level. I was struck by a sense that such adventurous work, requiring availability and vulnerability, would also require recurrent resilience.

Director/Co-Writer Simon Stone has the knack of invigorating theatre, enlivening actors and recharging audiences. Perhaps this is due in part to the intrinsic sense of risk that pervades his productions.

Catch it if you can get a ticket!