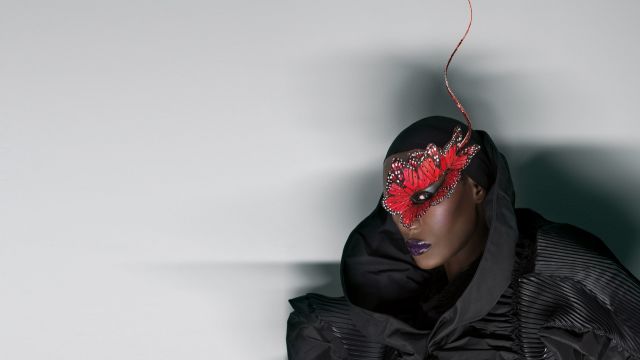 Adelaide’s beautiful Elder Park along the banks of the River Torrens was abuzz with excitement. We were all there to see the statuesque goddess Grace Jones perform as part of the Adelaide Festival. We were going to have to wait though. If you were to believe the rumours, then this diva was going to be fashionably late.

Bright lights and the thumping sound of the band echoed Jones’ arrival 45 minutes past official starting time. All was forgiven quickly, when the deep tones of her break-through hit “Nightclubbing” rang through the air.

Standing upstage on a platform, she cut a menacing figure. Wearing a gold skull mask with protruding spikes and covered head to toe in tribal body-paint, Jones’ eclectic fashion sense did not disappoint.

From the beginning of her music career in the late 70s she has explored many musical genres; from disco, new wave to her roots in reggae and there is no denying that there is a visual aspect to Jones’ performance. She was once described as ‘beautiful and grotesque at the same time’.

Each song was accompanied by a costume change, much to the delight of the crowd. Each more bizarre than the last, we witnessed various head-dresses, tulle hoop skirts, hooded wraps and a large white mohawk wig. It is clear that Jones is comfortable playing up her reputation for all things strange.

As she belted out hits such as “Warm Leatherette”, “My Jamaican Guy” and “Private Life” she left the audience spellbound. Renditions of Roxy Music’s hit “Love is the Drug”, the hymn “Amazing Grace” and Edith Piaf’s “La Vie En Rose” showed her versatility.

Jones saved her biggest hits for the finale. “Pull up to my Bumper” was sung as she straddled a security guard and walked through the standing crowd either side of the runway. Her chart-topping smash from 1985, “Slave to the Rhythm” was performed whilst twirling a hula-hoop around her waist for 15 minutes.

As Jones introduced her talented band, she made special mention of her son, Paolo Goude on percussion.

There is no doubt that Jones came to town to entertain. Gyrating her incredible body to the fans down the front, she was naughty and unapologetic.