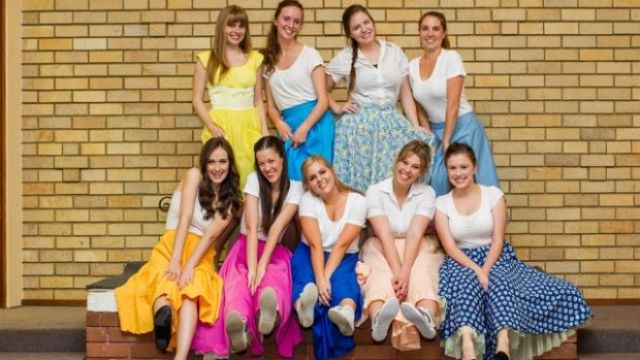 Getting in just ahead of the big-name, big budget professional revival touring Australia later this year, Hornsby Musical Society’s bright, energetic no-frills version reminds just why Grease is such a staple for schools and young amateur casts, despite the dubious morality of its ending.

The current version combines the favourite songs from the film with the original stage script and score.

Apart from three adult roles, capably played, Grease is a show full of roles which teenagers and young adults perform with relish, recognizing and communicating so much of themselves and their peers in the parts. That naturalness and the credibility that provides generally makes up for any occasional lack of stagecraft or polish.

While the program indicates that several performers lack stage experience, most establish clear, individualized personalities, performed energetically, and only occasionally are there issues like dialogue being a little rushed.

For audiences of several generations, too, the John Travolta / Olivia Newton John film is a pop icon, while anyone can enjoy situations reminiscent of the best and worst parts of High School and being a teenager.

Hornsby has found a capable, enthusiastic young cast. Alexandra de Zwart’s attractive girl-next-door Sandy has sufficient spine to be genuinely interesting; Emma Scarlis and Chris Circosta play Rizzo and Kenickie with the accustomed attitude, while as Marty, Chloe Horne’s ‘Freddy, My Love’ is an unexpected vocal highlight. They are capably and enthusiastically supported by all the other Greasers, Pink Ladies and nerds.

As for the adults, Julianne Horne is credibly school-marmish as Miss Lynch, Alan Duncan’s Vince Fontain has the right mix of Disc Jockey ego and sleeze, while Paul Sheldon’s Teen Angel cameo is delightfully upstaged by the girls of the ensemble.

The ensemble singing is strong throughout, and their dancing exuberant.

Grease is a boisterous rock show, and some of the featured voices can’t quite cut through the small rock band, impressively led by David Morgan, but a majority of confident young voices certainly pump out the familiar score.

Despite the fairly minimal props and scenery, perhaps they could be cut back even further to speed up scene changes, and lift the pace, allowing the show to rely more on its colourful costuming.

As the young cast of Grease thoroughly enjoy performing the show, the great time they are having proves infectious for their audience.