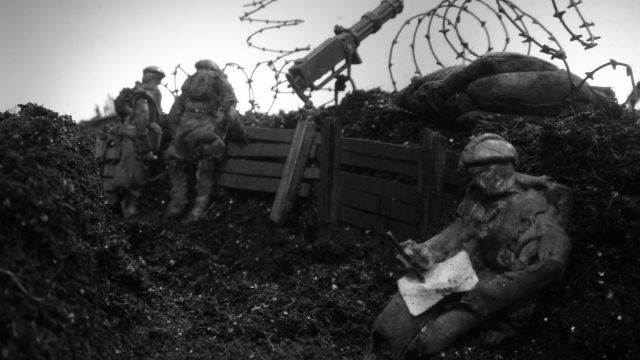 Anyone who demands innovation when they enter a theatre should prioritise The Great War, brainchild of artists from The Netherlands. This is a show that truly seems to be developing a unique medium of theatrical communication, one that could be described as ‘live cinema’: events and actions are depicted on-stage in often-ingenious miniature form, while being photographed/transmitted in-the-moment, and in close-up, to a screen above the stage.

Muddy battlefields, tanks in motion, scorching flame, snow and rain, symbolic replenishment of greenery after the devastation; all and more are here. Accompanying the images are live narration and SFX/music.

What the members of Hotel Modern attempt here is, on a technical level, quite remarkable, though it does not always achieve the piercing emotional connection that it might have done. Without a narrative or clearly defined characterisation, even the accomplishment on display cannot prevent interest level from dipping occasionally over the course of an hour.

There has always seemed to be a grim irony regarding the use of the word ‘great’ to refer to World War I – or any war, for that matter. This particular show, however, does achieve moments of greatness in its idiosyncratic depiction of historical combat, enough to make The Great War into something special worth seeking out.