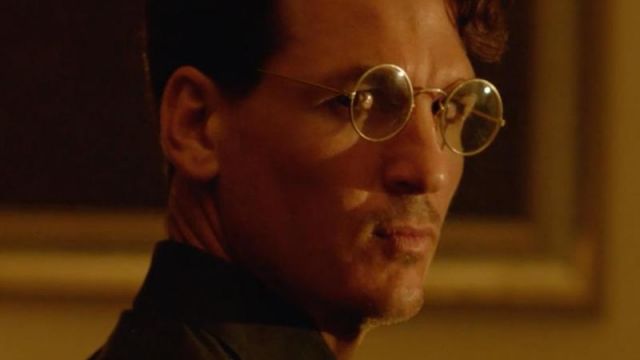 Luke Townson’s Green Tea is a ‘psychological thriller’ based on the 19th Century book by Sheridan Le Fanu.

In this intriguing one-man show Luke Townson plays the ‘philosophic physician’ Dr. Martin Hesselius, as well as a number other characters. He is absolutely terrific, not only in his performance but also in contending with a rather difficult venue that is not really ‘friendly’ for this creepy ‘gothic’ tale.

This is a story about Dr. Hesselius dealing with a case of an evil spirit tormenting a kind and respected English church Reverend. The influence of the works of Swedish philosopher and ‘spiritualist’, Emanuel Swedenborg, play a significant role in this 19th Century ‘gothic’ tale. Swedenborg believed that we have with us at all times two demons whose ultimate goal is to destroy us.

Whether or not you actually believe this is irrelevant as this is the ‘artistic truth’ in this show. In dealing with any form of ‘gothic’ drama, including Shakespeare’s Hamlet as well as Stephen Mallatratt’s The Woman in Black it is necessary to suspend belief, or disbelief, in the spiritual world, in order to enjoy the show.

In this story there is only one demon from hell – ‘a black monkey’. This demon haunts the Reverend and is always visible to him no matter what time of the day and night. Even when the Reverend is in the supposed sanctuary of his church and private residence this ‘black monkey’ menaces him, urging him to destroy himself. Eventually, he appeals to Dr. Hesselius who as a ‘philosophical physician’ is an expert in these matter.

Can the good doctor save this man of God in time? That is the drama of this rather suspenseful and chilling story.

Luke Townson is absolutely terrific. No wonder he was the winner of the ‘2018 Standout Actor Award’ at the 2018 Sydney Fringe Festival. His command of the stage and respective characterisations are simply marvelous. It is not difficult to suspend belief when such an actor is in complete control of everything he is doing, making it feel like it is all being experienced in the immediate present.

Luke Townson is a graduate of the Acting course at QUT in Brisbane. He is a credit to his teachers and to the course at QUT. It was whilst he was a student at QUT that he met and began working with the late, great Billie Brown in adapting works for the stage. Green Tea is dedicated to Billie Brown, and this show and Luke Townson’s performance is a completely worthy and honourable dedication to this great Australian actor.