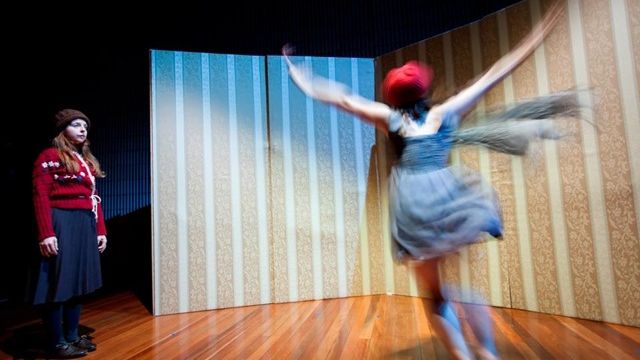 In this production, clockfire theatre co looks at the subject of death and grieving in a way that brings to mind the twists and turns of Alice’s descent into Wonderland. Except that here, the protagonist is a woman. Her guide is not the White Rabbit, but a wide-eyed woman dressed in grey and red; and her journey, not into Wonderland, but into the netherworld of death itself!

There is much that is commendable in this production. Once drawn to the subject, research and discussion have led the company – Emily Ayoub, Kate Worsley and Gareth Rickards – to convert their insights and impressions into a piece of theatre that mixes styles and forms, music and lighting, to explore ‘the colours, textures and rhythms of grief’.

The performance begins, realistically enough, in a funeral parlour. Quiet, funereal music plays. A woman enters. She seems afraid, bewildered, lost – and she disappears. Starkly the mood is broken by the funeral parlour staff as they celebrate a birthday. Their joking is discordant, irreverent; but then they deal with death daily, so much so that they switch automatically from merriment to sympathetic understanding when a grieving relative calls to book a funeral, and they begin to take down particulars.

Here the realism ends. A young couple appears. She is the woman who disappeared earlier. She eats a piece of pizza on one side of the stage. He plays the violin on the other. Next they are at the funeral parlour filling in forms. Suddenly, somehow, the realisation comes that it is she who has died.

The music changes, the lights dim, and she is alone on the stage. Then, absurdly, the flats that form the walls of the funeral parlour start to move. Silently, constantly, they straighten, bend, reform and slide around each other. In the turmoil this presents, the grey, wide-eyed woman appears, beckons … And so begins a weirdly imagined journey into death. Through music and lighting and the carefully orchestrated and coordinated choreography of the moving flats, her guide takes the woman through changes in place, temperature, wind and rain. Another woman in white with a burning cigarette keeps appearing. As does a strange man in a turban eating pizza. The imagery is macabre and disturbing. Is it that her journey represents not death, but the grieving process itself?

Eventually reality returns. Her funeral is over. Her grieving husband is left with only the funeral parlour staff to comfort him, their words resoundingly hollow after the imagery that has gone before.

This is a very thoughtfully developed piece of theatre. The ideas and characters, the earthy and the ethereal, have been carefully created. The movement – of the flats and the actors – has also been carefully planned, choreographed and rehearsed. The ensemble – Emily Ayoub, Gareth Rickards, Kate Worsley, Roderick Byrnes and Anna Martin and director Jo Turner – work seamlessly together, changing characters and costumes, moving between and behind flats, developing and changing atmosphere and mood.

There is the tendency with a production such as this to over-use the effects a little, so that their magic begins to wane. In this case, the journey is a little too long, and the impact of the moving flats used a little too much.

Nevertheless, it is refreshing to see a piece of theatre that is so original, imaginative and so theatrically conceived – yet gets at the heart of something that is as emotional as grief. For instance, one of the most poignant and lasting images of the play is the grieving husband redialing his mobile phone over and over again to hear his dead wife’s voicemail message.  How many people have done this, how many times?