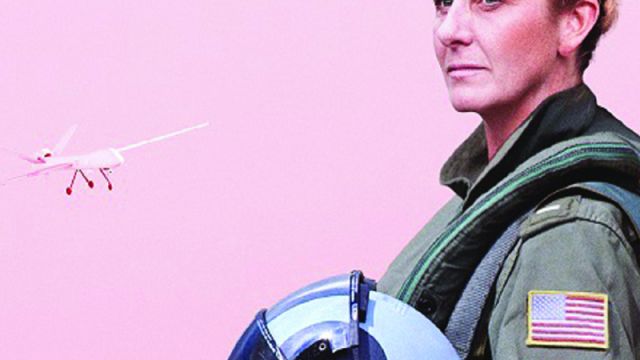 Grounded is the story of an American Air Force fighter pilot. Brought to life by experienced actor Martha Lott, it tells the tale of a woman’s love affair with her job and her obsession with ‘the blue’ (sky). “Astronauts have colour, but I am the blue,” she proclaims.

Lott marches onto the stage, her stance indicating a strong, driven and proud woman. Suited up, the pilot has just returned from a mission and celebrates the success of it at the local pub with ‘her boys’. Seen as one of the lads, she laughs at how threatened the opposite sex are when they realise what her occupation is. She recounts the night that everything changed when she was approached by Eric, the man who would become her husband.

George Brandt’s writing is compelling. His words tell the story of the conflict our protagonist faces when she falls pregnant and is then relegated to the ‘chair force’, a unit of pilots who fly drones from the safety of a trailer in Nevada.

Trying to find the positives in her new demographic, she soon becomes hypnotised by her new mission; the white knuckles have returned, indicating the adrenaline pumping through her veins.

It is hard to imagine anyone in this role except Lott. Her portrayal is commanding and shows an underlying fragility. Delivered at a rapid pace, the imagery Lott creates takes the audience on a wild ride and Director Poppy Rowley does well to make the bare stage feel full.

This emotional tale is so well told, that you are invested. As it nears its heart-breaking climax, the complexities of this drone pilot’s role become clear.

Lott is mesmerizing. Her layered performance is a triumph, as is this tale of modern-warfare.