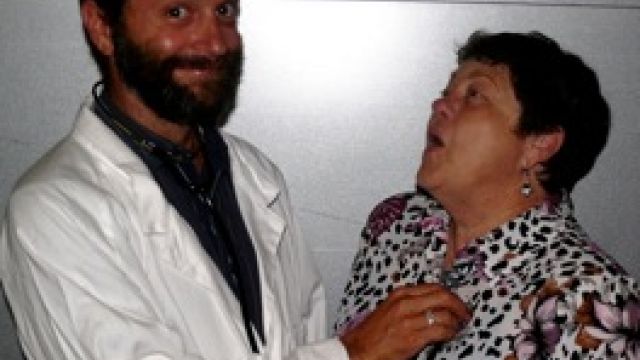 Alan Bennett's play, Habeas Corpus, is not the normal run-of-the-mill comedy. Plagued by vertically-challenged trousers, disappearing breasts, and pompous doctors, the Malanda Theatre Company's first production for 2010 is a farce with intellectual undercurrents. Acted on the simplest of sets - three chairs and a vacuum cleaner - the play is a fast-moving feast consisting of poetry, song and good comedy acting. Howard Smith, complete with the obligatory deep, reassuring doctor's voice, excels as the frustrated Dr. Wicksteed. Howard's Mills and Boonish monologues, and his words of worldly wisdom, are one of the highlights of an intriguing comedy. Judy Quillam, as the cleaning lady, was in top form in a role that could have been written for her, while Gill Harrington hit the heights with an energetic performance as Dr. Wicksteed's wife. The supporting cast of Seth Hartley, as Sir Percy Shorter, buried deep in an oversized suit; Lucy Davis, as an attractive, but pompous ex-colonial; Ciaran Carey as an undersexed priest, and Shantelle Kerwin, as the only sane person on the stage; were all good value in their roles. Cliff Rogers' lighting plan played a big part in the production, while Jim Hill’s' direction was well-paced, economical and enjoyable to watch. Habeas Corpus is a different style of farce, but one which the large cast mastered with aplomb.
Ken Cotterill