He Dreamed a Train 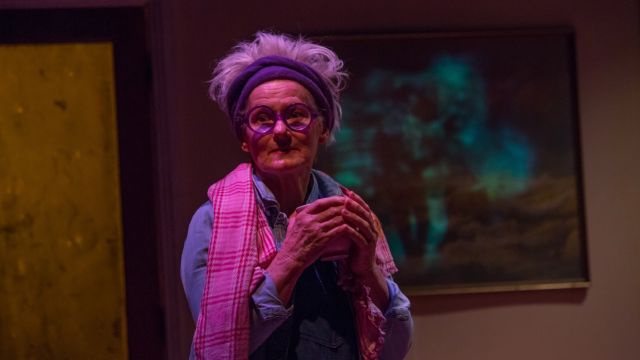 The Visy Theatre is the perfect space to experience the intimately powerful performance of He Dreamed a Train. The raked seating that kisses the stage’s edge along with Margi Brown Ash’s pre-show introduction encourages you to feel you belong, that you’re at home in the lived-in lounge room set.

You’d have to be dead inside not to feel the personal pain seeping from this performance that explores the loss of a sibling to terminal illness. Written by Margi Brown Ash and Travis Ash, the story is inspired by a tale by Margi’s brother and by his illness. So to say the scripting is personal feels quite the understatement. While it may move you to tears, the tale is still peppered with amazing moments of joy and positivity. The writing is nostalgic, poetic and very relatable.

Actors Margi Brown Ash and Travis Ash have an understandably outstanding on-stage trust and rapport. Neither seeks to outshine the other, but both sparkle in their own ways. Margi has this energy and passion you feel is almost punk or jazz in its risk taking and unpredictability. Yet once she does or says something, you’re utterly convinced by her. Travis’s physical discipline, focus and controlled articulation provides a comforting counterpoint. His musical additions to the story were excellently executed. The story’s themes cover the complexities of human existence; of home, belonging, death and family, theology and myths including family tradition and the mythos that grows from it. While it’s still full of light and love, you may find the pain and sadness in this show takes you off guard. When Travis transformed from a young man into the older version of his uncle and walked off stage, I was so moved, crocodile tears suddenly sprung forth without warning.

The whole show was ably supported by excellent lighting by Geoff Squires and Travis’ superb sound design. The thing that takes this amazing show to the next level, however, is the digital set design by director Benjamin Knapton and AV designer Nathan Stibthorpe. Holy moly! This show could be in GoMA because it’s a work of modern art. Cleverly, they slowly introduce elements of the digital into the physical set design, incrementally including more and more. By the time the show’s reaching denouement, your mind will be blown.

At times it’s trippy, at others like being inside someone’s imagination or living in a dream. The way the whole set shudders when Margi gets angry at her brother; the white noise as she sits curled in contemplation in a large soft sofa chair; the portrait on the wall with Margi alive and interacting with her brother’s ghost; the blaze of fire before Travis, as a younger version of his uncle bursts forth on stage to deliver a mythological monologue, were all jaw-dropping.

As a reviewer you sometimes worry about sounding ingenuous and giving a glowing report, but I can say with complete confidence, this show is amazing. I wish there were more like it. This is theatre. He Dreamed a Train is life on stage, revealed in all its truth, depicted as a stunning piece of modern art by highly skilled professionals. It’s a show Brisbane should be proud to have on our stage.