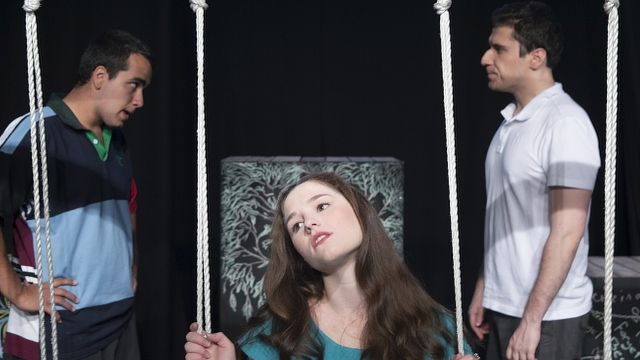 Every ghost story needs to redefine the afterlife. In Kit Brookman’s pitch black tragicomedy Heaven, the dead can be reborn as flesh but have little memory of their old life. The play opens on bully schoolboy Stewart (Tim Abdallah) explaining to his friend Max (Vitas Varnas) that their school acquaintance Angela had died. Stewart makes light of it, disparaging Angela as weird and having no friends, but as he speaks it becomes clear that he saw the accident and that he’s hiding trauma under macho bluster. Max suggests that they resurrect her (he has a handy book with instructions) and so with the help of another friend, goth Sally (Daniele Clements), they do. 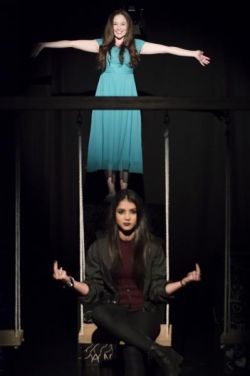 As the ghost Angela, Bronte Forrester is delightfully naïve and otherworldly, giggling as she relearns the sounds and sensations of the world. Tim Abdallah’s performance as Stewart was excellent and energetic. While the character is not in the least bit likeable, you do feel for him and get some insight into why he behaves the way he does. Vitas Varnas and Daniele Clements are very capable in their roles. In general however, the comic timing needs a little work; some jokes seemed to have been lost when lines came too slow for the shock value to hit. Black blocks of different heights decorated with inscriptions to the dead girl and a swing set place the action at a school, but perhaps the directors should rethink the scene where Sally is first introduced, which takes place on a high block behind the swings. The top bar blocking the actors’ faces from the audience is unnecessarily distracting. The script itself shows enormous promise but perhaps it’s not quite there yet? Sally is a great character, but she is arguably unnecessary to the core of the play. Alternatively she could be rewritten to make her more central to the action. That said, the dialogue is superb, authentic and witty, and the play is full of interesting ideas and themes such as bullying, violence, and ostracisation.

SLAP Arts Company was formed five years ago by Luke Beatty and Alec Council, who were both 16 at the time. They aim to attract a youth audience. The second half of Heaven gets rather dark and may upset sensitive teens, but will appeal to those with a sense of the macabre.