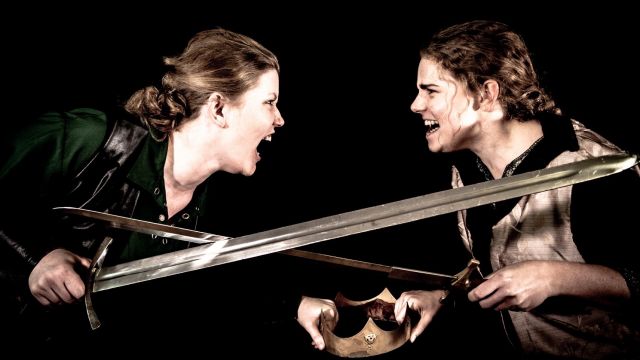 Of all Shakespeare’s many plays, the historical ones of the English Kings are probably least known and understood by the modern audience – they are never taught in schools. Thus, this was a very welcome chance to see one such play. Set in the early fifteenth century when the king of England often came to the throne by means other than hereditary, conflict is an underlying feature but not necessarily the centrepiece of the action. Henry III is king while Prince Hal, the future Henry IV, plays up to annoy him and past supporters such as Hotspur rise against him for his treatment of them. It is the interplay between the various sides of the conflicts, the families and the individuals that makes this an interesting production. The character, Sir John Falstaff, adds much needed humour and light relief as well as wisdom to the over-all play.

In a modern setting, director Jason Nash has daringly cast females as several of the main male characters and it worked for the most part. The action flowed well. Outstanding in a generally solid cast was Callum Campbell as Sir John Falstaff as he brought the full scope of the character to life. The clarity of his key speech was vital. Hannah Martin (Prince Henry/Hal) and Meg Bennet (Henry Percy/ Hotspur) were both good in these crucial male roles. Unfortunately Troy Bullock as Henry III was not as clear in his delivery as was needed even though his stage presence was dominant as was needed.  The director has used his actors well but a little more clarity and confidence in each character would have helped.

Fortunately, some judicious cuts had been made to the original script and this allowed the action and momentum of the play to proceed well. To present such a complex play with such clarity on a small stage was quite an achievement – well done. There are not many chances to see an historical play by Shakespeare such as this so make the most of the opportunity. It is well worth a visit.