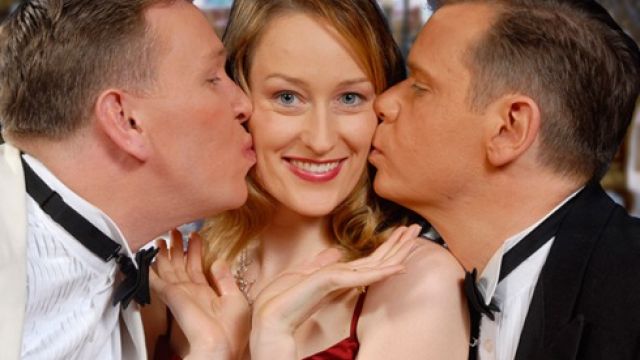 In our precious world of Music Theatre, there are people who really know what they're doing and people who don't: and from the moment you set eyes on Mr Staples' stunning (and magically transformational) set and Mr Karagiannis's utterly flawless lighting of it, you will rightly anticipate that CLOC Musical Theatre's production may just well set a new benchmark. And so it does, eventually, to become a wonderful achievement of which the company should be incredibly proud.

Which only leaves the bit about the people who don't know what they're doing.

Watching and listening to High Society on stage is like watching a grave being robbed: a sorry mess of a show that somehow manages to take theatrical and cinematic icons (Philip Barry's stage play, and then film, The Philadelphia Story and Sol C Siegel's film High Society), add some trusted, then obscure and then some even more obscure Porter tunes to a leaden, and (surprisingly given the wit and prestige of the material's sources and original casts) humourless 'book' to come up with a compilation musical of the worst kind. It's as though people without any creative ideas of their own sat around the kitchen table, opened a well-thumbed "Cole Porter Songbook" and went "I know! Let's make a musical! A really, really long musical!" Cole Porter's terrific and efficient songs for High Society (the film) are considered to represent his last truly great score … and one might have expected them to be delivered, unaltered, to the stage. What did Mr Kopit and Ms Birkenhead think was missing? Unfortunately, we soon get to find out … and we're only left to wonder what Mr Porter would have thought if he'd been alive to witness it.

The lumpy Ridin' High (lifted from Red, Hot and Blue) becomes, in this context, a pointless piece of fluffy exposition which seems to exist only to have our heroine, Tracy Lord, run around in jodhpurs for some inexplicable reason. Regrettably, it also gets the additional burden of having to open the show … after a mannered and unengaging nod to the title song. Songs that open shows (just stop for a moment and think about some of them) have to be really good. Ridin' High just doesn't cut it. I Love Paris and It's All Right With Me (both from the much better Can-Can) are also jammed in, and the Porter classic – Just One of Those Things (from Jubilee) – also gets a run. Now, True Love is a wonderful song … a standard … but it ain't no end of Act One number. Instead, Act One just stops … as though someone who meant the world to us suddenly dropped stone cold dead right before our very eyes. It's a very uncomfortable moment to which the audience appeared to have no idea how to respond. The experience of witnessing this extraordinarily beautiful production, performed by a uniformly excellent cast, orchestra and crew and yet still suspecting that something important was absent, was truly difficult to comprehend.

Mr Bradtke brings a skilfully crisp guiding hand to the proceedings, and even though the pacing on opening night was uneven, it's impossible to determine whether there was anything further he could have done or if it was the musical's inherent dead weight that kept dragging it down. Ms Woodford's orchestra, with the exception of some rogue strings and uneven sound mixing, acquitted what passes for a score beautifully – even if the orchestrations are, mostly, deadly dull.

In the end, I realised I wish I'd been at the company's recent production of Miss Saigon: a piece of music theatre equal to their incredible talents and abilities.