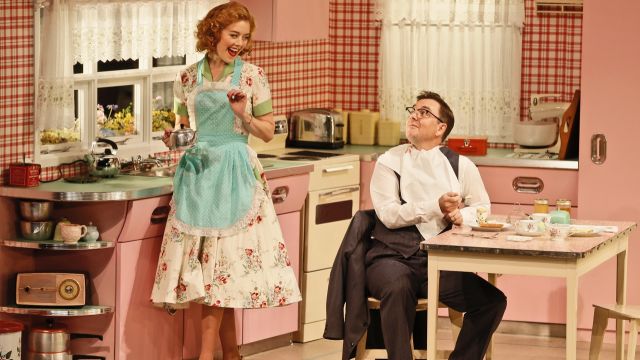 The inversion of the familiar ‘Darling, I’m Home’ suggests the argument of Laura Wade’s comedy.  ‘Darling, I’m Home’ is that weary-cheery greeting heard in many a 1950s American sit-com.  The breadwinner comes through the front door and calls to his (always ‘his’) little homemaker that he is home from the heartless world and ready to be welcomed within the bosom of his family.  ‘Home’ for Judy (Nikki Shields) is a haven from a world she dislikes and fears – a haven she controls.  She’s chosen to recreate (her version of) the 1950s.  For her, that was a time of kindness, good manners, cooperation and – most important – romance within clearly defined gender roles.  (Think Doris Day and Rock Hudson.)  And she’s gone all the way: her home (a magnificent two storey facsimile by Renée Mulder) is all 1950s colours, furniture and decor – including an unreliable but period fridge – and she swirls about in high heels, full skirt dresses, lingerie and the sort of ‘feminine’ jeans you’d see on a cute pin-up girl in a ‘50s Coca-Cola poster.  When the play begins, the set with Judy almost dancing in it is like a picture spread from Woman’s Own or McCalls.  Acquiescent husband Johnny (Toby Truslove), a real estate guy, returns in the evening in his ‘50s suit and Trilby, and Judy has his slippers and a drink ready, dinner on the stove – and clearly, 1950s or not, theirs is still a very sexual relationship… 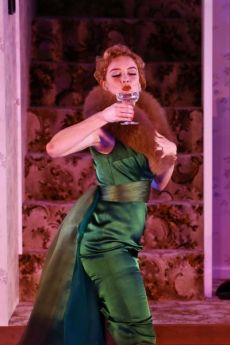 Paul Jackson’s lighting design segues for scene changes between hazy fantasy pastels and harsher shadows like those Douglas Sirk movies of the 1950s that implied the happy American home was a metaphorical or psychological prison.  Meanwhile, Composer and Sound Designer Jethro Woodward combines appropriate pop songs with bursts of dark melodrama that would not be out of place in a Sirk movie.

Director Sarah Goodes, as ever skilful in using a big space, sharpens the ironies and contradictions at every point.  And Darling, I’m Home is awash with irony.  Husband Johnny may be ambivalent, but he plays along – and why not?  Judy waits on him, irons his shirts, and is beautiful in her ultra-feminine 1950s way.  Their friends Fran (a vivacious Susie Youssef) and Marcus (saturnine Peter Paltos) play along too – but for them, it’s just fun, a game.  The whole shebang is for Judy’s obsessive benefit – and she gets fiercely snippy when anyone questions her fantasy.  Johnny’s politely bemused boss Alex (Isabella Yena) provides an immediate contrast: she’s dressed in practical, non-frou-frou dark colours, is natural, smart, funny and she lives in the present.

A central element of the play’s argument is that each generation rebels (initially?) against the former.  Judy grew up with her feminist mother Sylvia (Jane Turner in a lovely matter-of-fact performance) in an all-female commune, which was dirty, chaotic and doctrinaire.  Judy hated it.  Nevertheless, she asserts vehemently that she’s a feminist and being a feminist means she can choose – and she’s chosen this - and she can be ruthless to maintain it.

There are plenty of laughs, but those laughs are just about all at the expense of Judy.  She is the paradox of the play.  And she is the Joke.  She’s not stupid; she’s just determined.  I think Laura Wade wants to elicit our sympathy, but as this play of ideas continued, I saw its central character as desperate, deluded, pathetic, neurotic, bullying and just plain silly.  Her reasons to go this far into fantasy land don’t convince and her version of the 1950s is highly, cosily selective: she’s nostalgic for a period she never experienced.  (In its way, the play is highly critical of the air-brushed version of the 1950s presented to us, particularly, in American movies, magazines and popular music.) 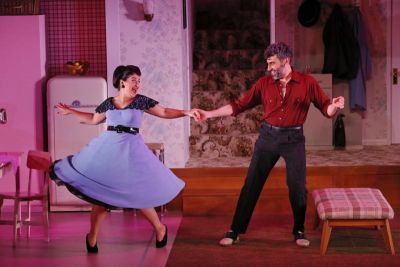 Sylvia, a ‘second-wave’ feminist, is appalled at Judy’s backsliding from all that women fought for.  Finally exasperated, she tells Judy in a splendid rant what the 1950s in Britain were really like.  That includes the fact that men (including Judy’s burnished image father) were philanderers and adulterers, that sexual harassment in the workplace was commonplace – and there wasn’t much a woman could do about it.  How does Judy not know this?  Why has it taken Sylvia so long to tell her?

It’s a strange play.  Act 2 begins with a flashback that explains – but doesn’t – why Judy began this lark: made redundant and Johnny expecting a promotion provided the escape experiment that has become a trap.  Overall, the play seems rather thin, as if too plainly made to prove a point – even if the point is somewhat elusive.  It’s money – or the lack of it – that forces change.  As a comedy, it must have a happy ending, even if the compromise that provides it feels a little trite and obvious.   But then this play won Best Comedy at the 2019 Oliviers so perhaps it touches a contemporary nerve: the sneaking temptation to give up and retreat from a mean and unfair world.