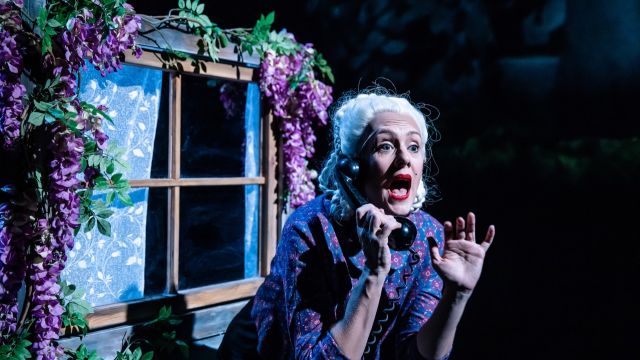 The Phoenix rises from the ashes - from the ashes of the worst time in Bryony Kimmings' life in this her first show for ten years.  She presents her experiences of this almost unimaginably bad time in a highly original multi-media, multi-platform one woman show.  It was for her a time of near fatal, crippling post-natal depression, madness and paranoia.  Her son – her first child – was and is severely disabled.  She broke up with the boy’s father (well, he abandoned her) and she almost wilfully drowned.

Some might think that it would be traumatic to relive these things on stage night after night.  On the contrary: she is following the advice of her therapist to ‘rewind’ her experiences – like watching a film – and so they are relived ‘on stage’ which means that Ms Kimmings has transmuted and distanced her experiences into art so that we can experience them, so that they are ‘dramatic’ and entertaining.

Yes, ‘entertaining’ because she is entertaining, warm and likeable.  There’s a sense of friendship and intimacy as she tells her story with wit and down-to-earth self-mocking humour – which seems to me a very female way of telling a story.  In the course of it, she adopts a variety of stock female roles – the pre-trauma party girl, the big hair sex bomb getting her man breakfast to ‘trap him’ (it works: she gets him – for a while), the terrified heroine of the Hitchcockian thriller, the stalked and helpless victim in a horror movie and so on – reminiscent (although much funnier) of Cindy Sherman’s photographic experiments with female ‘types’ or role models imposed by society or the patriarchy or in default response to trauma. With these roles, Ms Kimmings either ruefully sends herself up or takes the paranoiac sting out the effects of profound depression.  They are shot with a fixed camera and simultaneously projected onto a big screen or, via brilliant projections by Will Duke, she is lost and vulnerable in a wood, or sinking and drowning in a flooded stream – and thus the cinematic element of female types is emphasised, even if the near drowning is (or was) for real.

There are also small sets and one large one (covered by sheets until she needs them) designed by David Curtis-Ring.  The most important of these is a dolls house size cottage, isolated in – as she puts it – ‘darkest Oxfordshire’, a pretty if run down cottage with a stream that floods beside it.  This cottage is the setting for the worst of her experiences – dealing with her disabled child, the desertion of her partner (the cottage splits in two) and the flooding stream.  Finally, because she overcomes and rises, and a strong and invincible woman emerges, she can return warily to the cottage and see that a new and happier (for the moment!) family has moved in – and, curiously, this sequence is among the most moving of the show.

Of course, it would be churlish – and risky - to criticise a show made of such heartfelt and heartbreaking material, and from which our heroine emerges to be the strong and loveable woman on stage before us, but in the effort to make it ‘safe’ for us as well as for herself – a promise Ms Kimmings makes at the start – there is a certain studied amateurism (the sets, for instance, are a bit rough and knocked together, and videos are grainy and badly lit) and a carefully rehearsed ‘spontaneity’ to this knowingly structured presentation.  Disguising those things is Ms Kimmings’ skill as a writer and performer, and a reason for her continuing success.  She’s like our friend doing a funny turn and while we laugh, we love her – and so we feel for her too.  She connects with her audience and, with this show, by the end, some women are in tears and some men are thrown back in their seats, overwhelmed by the power of the (apparently) raw emotion.  This may be therapy at one remove for Ms Kimmings, but it is theatre, after all, not a confession or a conversation and it demonstrates how art can heal.

Images: The Other Richard