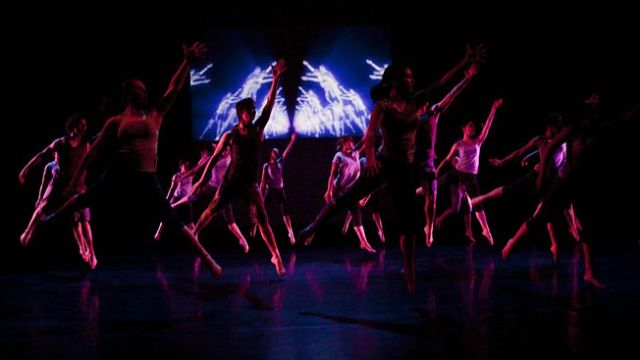 Where have we come from, who are we and where are we going? In its flagship performance Identify, Quantum Leap deals with facets of the self, be they historical, personal or social—questions which must be renegotiated by each generation and so never grow old. Identify comprises three pieces linked by theme, each telling stories with movement, complimented by clever and sympathetic projections and music. Quantum Leap, the performance ensemble of QL2, a youth contemporary dance group, has dancers with a broad range of skills and experience from intermediate to those studying dance at university and two members of the Bangkok Dance Academy. Having grown from out of the marvellous Human Veins dance group run by Meryl Tankard in the 1980s, the group maintains a strong commitment to creative and intellectual expression, all of which were on show in this production. The professional choreographers have worked within the range of skills to create three great pieces. The Land is Calling, choreographed by Jodie Farrugia, tells the history of migration to Australia through vignettes and dance images. Opening with gentle guitar accompanying the sound of waves, the movement is fluid and smooth, reflecting that all early immigrants travelled by sea. Later the music becomes stronger rhythmically as various new groups arrive and the dance becomes energetic as dramas are enacted, notably an acrobatic young convict performing gymnastic feats as he struggles with his chains, and dancer uses her stylised flowing, white dress to form shapes and images, referencing the constraints of 18th century dress on female immigrants. Massacres and discrimination in various forms are symbolised.

Digital Face, by Anton, comments on modern social online identities which both seem to extend and obscure personalities. It plays with the imagery and superficiality of modern social media, and shows how individuality is swamped by the mass of online images and voices encouraging conformity. Familiar images amuse–the ubiquitous camera and the various stereotyped responses to being in front of it, hugs and mugs, bunny ears, poses and loser signs. Heavy, throbbing electronic music with a strong white noise component compels while it pleasantly oppresses, mirroring the all-absorbing nature of online life. In contrast Precipice,choreographed by Adam Wheeler, highlights the individuality of the dancers themselves. Performed by eight senior dancers, this piece began with the dancers each announcing their names and talking about something that worried them, seriously or otherwise. While the moves were confident, skilful, exuberant and full of ambition, there was also some surprisingly jerky anxiety and experimentation.  Highly skilled and athletic, the dancers presented their personas onstage while enacting social scenes familiar to young adults – infatuation, manipulation, friendship, superficiality and depth. Voiceover interviews with two performers expressed hopes and fears for the future. It was touching to watch these talented youths on the cusp.