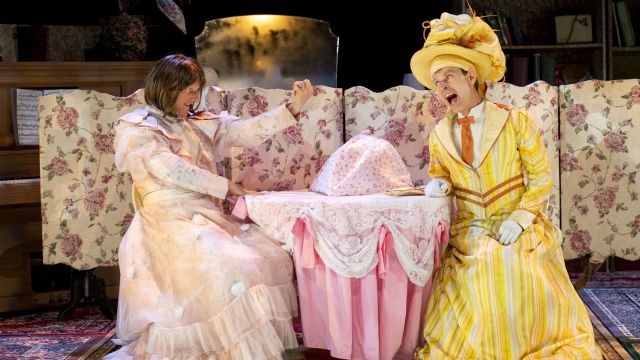 The ingenuity in this production of Wilde’s most famous farce is not in its re-interpretation of the text but in its capacity to fully expose all the underlying allusions. Jon Haynes and David Woods, renowned for their comedy work with the independent theatre company Ridiculusmus, set themselves an almost impossible task. The two comedy actors take on all the parts in the play, executing some very demanding and often challenging costume and character changes. The result is hilarious, enthralling and induces side-splitting laughter.

The crossdressing in the play highlights the homosexual undertones built into the text through the not so subtle references to gay culture (in the form of the names of characters and the use of props). The camp element is also very cleverly deployed to accentuate the satire of the superficiality of the Victorian era. When David Woods enters the stage as Lady Bracknell his ability to capture her imposing and imperious presence is wonderfully belied by the wildly absurd nature of the costume. John Haynes as Gwendolyn is equally irreverent and perfectly captures the ways in which airs and graces are dictated by the times. This irreverence is echoed in the extravagance of both the costume and the set design. The set is an incredibly rich tapestry of Victorian memorabilia which masks a somewhat gauche modernity. The ways in which the contemporary elements of the set design seep through the cracks is a clever and beautiful reference to the visibility of deceit and disguise that Wilde’s antics continually point out. Woods also produces a masterful performance of Cecily that is an uncanny evocation of Chris Lilley’s television persona, Ja'mie King (Ja'mie: Private School Girl ABC TV series 2013). This version of Cecily is so apt that it cuts through to the bone of Wilde’s humour and disdain for Victorian society.

The comedy in this production is also generated by an unabashed, tongue-in-cheek lewdness that gradually seeps into the performance as the character and costume changes become increasingly impossible to execute. Haynes and Woods are not daunted by this and simply resign themselves to it by abandoning a strict adherence to the constant switching. By the end of the play a mere gesture, the presence of a costume or a quick change in speech becomes sufficient to summon a character. This creates a very studied pace and rhythm in the performance. The play opens with a remarkable use of dramatic pause to introduce the character changes and then very gradually and deliberately descends into the wonderfully playful chaos that culminates in the union of the three couples.

The show was first performed at the Malthouse in 2006 and returns to open the theatre’s 30th anniversary season. This production is as much of a gem as the play itself, especially because of the way it so successfully retains a highly pertinent reflection on society, regardless of the era.