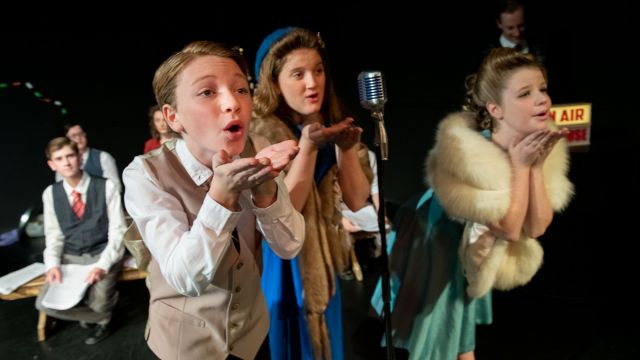 It’s a Wonderful Life was a fun and well-produced piece of theatre, presented with enthusiasm and a high level of skill by the nineteen youngsters in the cast.

These young actors had been working on the play for an intense six days before the performance and they deserve congratulations on their finished effort, as do the directors Michelle Nightingale and Alicia Zorkovic.

The cast were beautifully costumed and coiffured and they began the evening with their entrance into the foyer, talking to the audience and enjoying the compliments they were given about their outfits.

The stage was simple and worked well, with a table at the back for the sound effects. These sound effects happened exactly on cue and were a fun and important part of the play. Just about every member of the cast took on responsibility for creating the effects, from shoes walking on gravel, to doorbells ringing and doors closing, to glass breaking and someone jumping in the water. 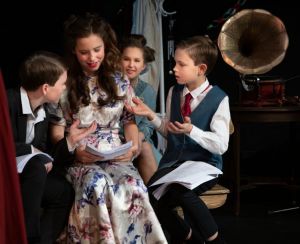 There were three old-fashioned radio microphones and the actors sat waiting for their cues with their scripts in hand, just as it would have happened in a real live radio play. What was impressive was the number of young actors who were word perfect after only six days.

They knew and understood their scripts and were able to give their lines expression and emotion. Their American accents were excellent and consistent throughout the play and the diction of most of the cast was very clear and easy to understand.

It’s hard in an ensemble production to pick out individuals, however mention must be made of a few of the major cast members, such as Georgia Polischoko as Frannie Filmore, who was a delightful host for the show and I really enjoyed the advertising interludes, led with confidence by Polischoko. Ethan Schembri, who played George Bailey the main character, is a young man to look out for in the future. India Zorkovic presented a natural and believable version of Mary Hatch, and Nick Mitchell was able to change characters, making it very clear which character he was playing through changes in his vocal presentation. And finally, Tom Grosser was a delightfully villainous Henry F Potter.

It was a very pleasant outing to the theatre and I will certainly be watching to see if some of these talented youngsters take wings and fly to future success as actors.