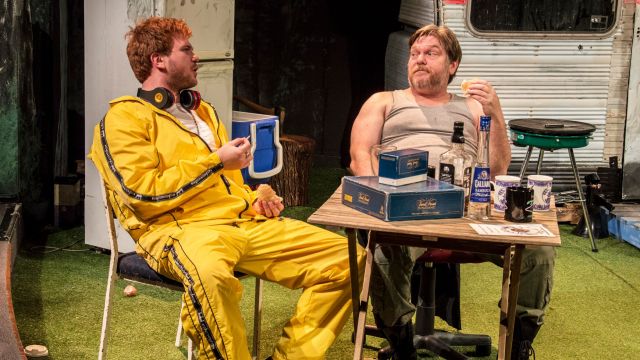 Directed by Nick Fagan, The University of Adelaide Theatre Guild’s performance of Jez Butterworth’s Jerusalem begins gently and somewhat serenely with an angelic voice delivering an acapella rendition of William Blake’s hymn Jerusalem. From there it tumbles into the chaos, anger and the dissolute life and thrall of Johnny “Rooster’’ Byron, a man whose dream of having and holding his patch of ‘England’s green and pleasant land’ is under threat. In fact, for the next three hours, he ‘does not cease from mental fight’, nor does his verbal ‘sword’ sleep in his hand as he relentlessly hacks away at British beliefs, lifestyles and conventions. He is a man scorned, reviled as a ‘gypo’. Seemingly a broken former stunt driver, he is in fact a powerful manipulator and master of his own kingdom of vassals, or as he dismissively refers to them, ‘rats’.

We first meet “Rooster” as the disembodied body of a rabid dog responding to the threats of an eviction notice by officious council employees (Allison Scharber and Curtis Shipley). Scharber’s character is punctilious and efficient, pausing only to re-apply lipstick so that she looks her best in the recorded version of the delivery of the eviction notice, and Shipley’s persona kowtows to her every command. ‘‘Rooster’’ is officially ‘under siege’. 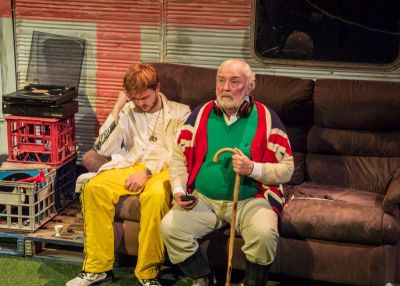 Brant Eustice as John Winston Byron (‘’Rooster’’), delivers a performance worthy of professional theatre. It is his show and his performance is extraordinary, compelling, and at times, heartbreaking. There is little time when he is not on stage, delivering rapid fire dialogue in a faultless, unwavering accent, mesmerising, shocking, disgusting and challenging the audience, particularly when he becomes a beguiling teller of tall tales. (Spoiler alert; the tale of the 45 foot giant who built Stonehenge is a beautiful, and important part of this narrative.) Eustice, in his commando pants and grey singlet presents his character as a paunchy and dissolute drifter. As ugly as is this man’s behavior, the audience is swept into his thrall over the very long performance. By the last 30 minutes of the show, audience sympathy for ‘’Rooster’’ was palpable. See the show just for his performance.

Whilst Eustice commands the play, there are also other standout performances and a strong sense of ensemble, particularly in the first half of the play. ‘’Rooster’’ has his pack of spliff smoking, underage drinking ‘rats’, and this group dominates the first act. 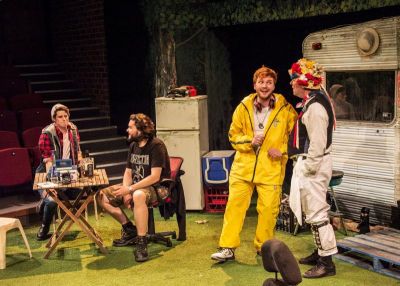 Despite accents not being consistent, the characterisation work of Oliver Reschke, Ashley Penny and Harper Robb was convincing. Benjamin Quirk as the young man embarking on a trip to Australia, has a voice with great timbre, and at times, he sounds like he had already been there. As The Professor, Adrian Barnes as the old man looking for his ‘lost’ wife Mary, delivers a poignant and consistent performance. Whilst her stage time is short, Georgia Stockham is powerful and heart-rending as the mother of Markey, son of ‘’Rooster’’, played with conviction by Jonathan Pole. Eloise Quinn Valentine, as Phaedra opens each act with haunting song. She looks vulnerable and confident, rather more in the important role as the singer than as the 15-year-old who has fallen into the clutches of “Rooster’’. Alan Fitzpatrick as Troy Whitworth, one of the few people to call “Rooster” to account, portrays anger and tension rather physically with a grim face, clenched jaw and balled hands. As a consequence, at times his dialogue is neither subtle and menacing, nor audible.

Much has been made of the groundbreaking nature of the script, and its content is undoubtedly that. The play is long, at over three hours with one interval and constructed in a way that a number of characters feed into the story as it unfolds. Thus, several characters appear almost as vignettes. It could be argued that 30 minutes of dialogue and interplay could be removed without impacting on this powerful story. 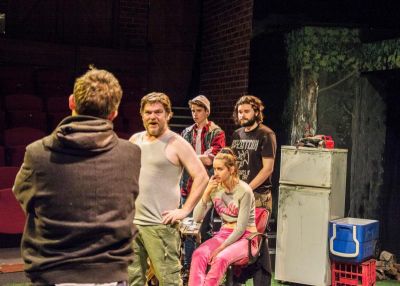 The first half of the play is about ensemble performances and the partnership of Eustice and Robert Bell, as Ginger, is a duo made in heaven. As the drug addled, aspiring, but delusional DJ Ginger, Bell is captivating. His attention to the twitching, sniffing and jerky, almost in drug withdrawal, body language is a class in method acting. Ginger drifts in and out of challenging “Rooster” almost as if his addled brain momentarily reconnects then loses the ability and will as “Rooster” recaptures total control, and him. Sadly, the second act, whilst gradually becoming all about “Rooster” gives Ginger little to contribute.

Fagan has done a fine job directing and is well supported by a strong production team that has paid careful attention to all of the elements needed to take the audience into the believable world of Jerusalem.

Jerusalem is a South Australian premiere. It is powerful, challenging, provoking, and not to be missed.