Judge Jackie: Disorder in the Court. 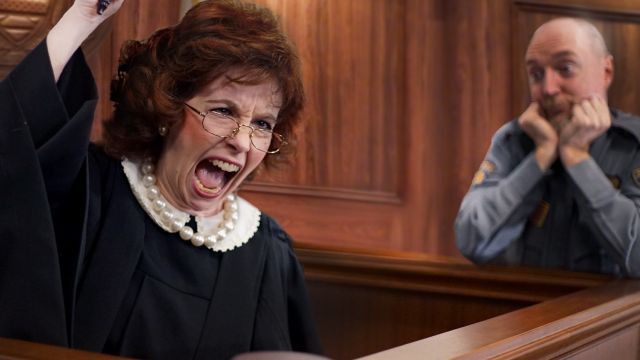 A phenomenally talented (and tireless) cast of five performers - backed by a flexible and powerful trio of musicians - go a long way toward making up for a less-than-impressive script, overcoming/transforming so-so material to make Judge Jackie into a largely pleasing musical theatre experience.

This show’s title and advertising images are a tip-off that you’ll be getting a reality-television satire (not the only one available to see at this year’s Adelaide Fringe) – but ‘disorder’ may be the buzzword that sets up expectations which are not fully met by the book/lyrics of Christopher Dimond (augmented by local references – some of them quite amusing - that have clearly been grafted onto this Australian premiere).

The romantic through-line between the two central characters is warm, well-acted, and engaging, but still naggingly conventional, while the string of caricatured couples who end up in the dock and in Jackie’s sights are written with much less wit or edge than one might hope for. ‘Disorder’ is actually something that the script could’ve used use more of; as it stands, the spoofing of targets such as Britney Spears feels curiously dated, and one wants the material to get wilder and wackier instead of sticking to tired tropes about ‘yokels’ and ‘gangstas’.

Fortunately, the expert hand of David Gauci has steered this ship to go full speed ahead (once past its comparatively understated opening), and the undeniable energy level really lifts proceedings to send you home with a solid smile on your face. The music is a major contributor to this, spanning a range of styles from soul and vaudeville to cabaret and waltz, played powerfully by Martin Cheney, Louis Cann, & Mark Zilotto. Not only does Katie Packer effectively embody Judge Jackie onstage as a smart, stoic, sympathetic figure who is slowly becoming exhausted and exasperated by her day-to-day existence, but she also makes for a simply sensational poster image! Adam Goodburn’s dual role demonstrates his abilities – not to mention versatility - in a most amusing and unexpected manner, while Paul Rodda brings his pitch-perfect vocal and comedic skills to a quintessential ‘huckster’.

Casmira Hambledon, playing a colourful collection of characters, once more proves herself as vital and radiant an onstage presence as one could imagine, as well as being technically unassailable and virtuosic in her vocal gifts. Joshua Angeles is equally impressive in an even dizzier variety of roles. (Louise Watkins deserves special mention for costuming them all so effectively, as does Kerry-Lynn Hauber for guiding their dance moves.)

While the writer behind Judge Jackie may have left his work open to charges of laziness, a positive verdict can certainly be handed down with regard to the exceptional ensemble put together and polished to perfection by Davine Productions. They collectively make this show into a fun frolic, with the added bonus of a beating emotional heart at its core.