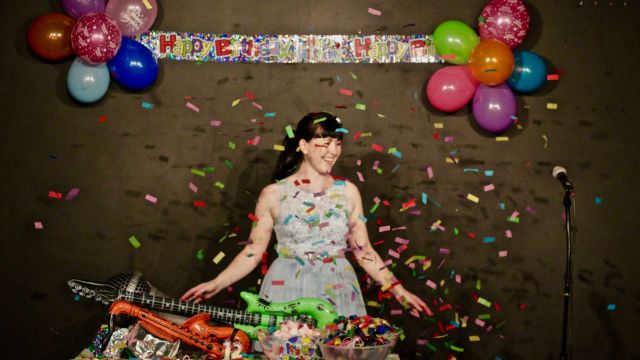 Who doesn’t love a birthday party with cake and decorations and a marshmallow eating competition?

Twelve year old Katie, played by Mary Frances Doherty, is at a crossroads and is making that monumental leap to secondary school. It is daunting, but without your best friend it can be terrifying, testing and life changing.

This 35 minute performance chronicles the insecurity, the bullying, the being excluded, lonely and lost, but also offers us a chance to share Katie’s optimism and hopes for her future.

Thoughtfully scripted, the party guests are all ushered in together, (after all who wants to be the last one at a party in full swing?) and Katie shares her birthday cards with us all. She introduces herself, making friends with the audience, eliciting favourite things from an initially shy group aged between 8 and very much older. She is warm and bubbly and seems confident and comfortable. Katie tells the audience about former birthdays and her laughter and memories are all about her best friend, who is not with us today as she has another party to attend with her new school friends. Strike one! Katie tells us that this is OK but as her story unfolds, so too does her hurt and despondence at being so quickly “passed over” by her dearest friend who no longer calls or responds to her texts. Strike two!

Amidst the marshmallow eating feat; nine was the count, we discover that Katie is not really as happy as she seems. Tormented and teased by new peers, she is lost and frightened in her new school and so alone and fearful, that we actually see her suffer one of life’s great indignities on stage. Strike three!  I will not spoil this.

Interwoven are “Truth and Dare” activities, the safe ones for the audience, the tough ones for Katie, and it is through these that we discover her truth. So distraught when telling part of her tale, Katie flings a bowl of party favours across the room and movingly, with no prompting, children in the audience quietly joined her and silently picked everything up. It was a revelation regarding kindness and human decency and rather than being “Three strikes and you are out”. Katie had, in fact woven her way into the hearts and lives of the audience.

Do not assume that this is a doleful piece. It is challenging in parts, but ultimately uplifting. The script is not particularly comprehensively written with Doherty needing the audience to prompt parts of the story and her pre-scripted message, but it is an important message for teens and pre-teens. It is, in essence what DreamBIG is about.