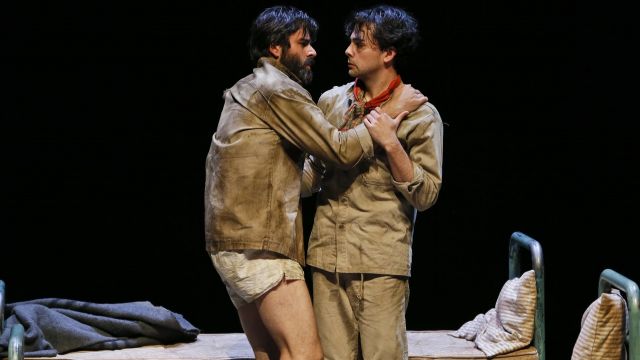 Kiss of the Spider Woman is a tragedy, a tale of courage, love and redemption.  It is set in a prison in an unnamed South American dictatorship – a place of imprisonment without trial, murder and torture for subversives and ‘perverts’.  John Kander and Fred Ebb were drawn to stories with an underbelly of wry cynicism and harsh reality – Cabaret, Chicago – but this is darker than most. Any music theatre devotee will want to see this production of a work by these two masters.

Molina (Ainsley Melham) is a gay window dresser, imprisoned for sex with a minor.  He keeps reality at bay daydreaming recreations of the movies of ‘Aurora’ (Caroline O’Connor) a star of the 1940s silver screen.  He can recount all her movies shot by shot, but one persona – the Spider Woman – both fascinates and terrifies: her kiss can kill.  She is a metaphor for Molina’s sense of his own doom.  A leftist revolutionary, Valentin (Adam-Jon Fiorentino), already a victim of torture, is thrown into Molina’s cell. Molina’s well-meaning prattle, mostly about Aurora, drives the stern, humourless – and homophobic - Marxist crazy, but as time passes and each of them undergoes threats, poisoned food and other tortures, they draw closer, relying on each other for support – though always under the surveillance of the prison Warder (Bert LaBonté). Musical Director and Orchestrator Jack Earle has an orchestra of only four musicians, but they sound like much more, maintaining Kander and Ebb’s ‘South American’ rhythms and 1940s show biz references without ever sinking to pastiche.

But there are some puzzling decisions by director Dean Bryant. The huge and forbidding prison set by Alicia Clements, complete with bars, cell doors, high gangways and stairs – and sliding panels upstage that open to reveal the musicians or become a movie screen - provides a large open space – like a prison’s internal courtyard.  This allows for Andrew Hallsworth’s busy choreography - with rather too much rearranging of beds – reflecting Molina’s Busby Berkley-like fantasies.  But that open space also sacrifices the claustrophobia of enforced proximity in Molina’s and Valentin’s cell. It’s curious because in some scenes a small, enclosed box of an office is wheeled out to suggest overcrowding, on the one hand, or privacy on the other.

Most of the casting, however, is excellent.  Both Natalie Gamsu as Molina’s mother and Elandrah Eramiha as Valentin’s love Marta sing beautifully and movingly.  Ms Gamsu in particular is totally convincing as a Latina mother. The always impressive Mr LaBonté has little to do beyond menace and a sadistic smile but does it with great presence.  Mr Fiorentino gives Valentin solidity and his stubborn resistance draws our admiration, but in the end, Valentin is there as something of a plot device and the contrast to Molina.

The show belongs, really, to Ainsley Melham’s Molina, a fact Ms O’Connor seemed to acknowledge with a generous gesture at the opening night curtain call.  His Molina turns in a second from campy gush about Aurora – which is irritating - initially - to convincing flights of fancy, revealing the artist he could have been.  We are touched by his helpless love for straight Esteban (Blake Appelqvist), but his self-knowledge – expressed in witty quips – sinks him to despair, to self-pity and self-loathing, but able to find caring and love for Valentin, and finally a courage he didn’t know he had.  By the finale, Mr Melham has made us love Molina and we gasp in horror at his fate.  This is a riveting performance by an attractive quicksilver actor surely destined to be a star. Unfortunately, and I write this reluctantly and with some trepidation, our beloved Caroline O’Connor is somehow just not Molina’s gay fantasy figure Aurora – let alone the deadly Spider Woman.  Not helped, I must say, by the Spider Woman’s black ensemble with some strange turban headdress. Ms O’Connor is a wonderful singer, dancer and comedienne, but here the role requires mystery, allure, and a sense of impossible glamour.  She sparkles as a 1920s flapper (one of Aurora’s roles) in an early number, but that is her forte. In the second act, she plays a parody of Aurora as a tragic Russian countess – in one of the movies that enrapture Molina.    Ms O’Connor is in her element, she plays it for laughs, she gets them, and the audience loves it – and her.  But in fact, the very idea of playing this sequence for laughs is wrong per se.  It’s a false step, a mistake – like some of the over the top ‘funny’ dance numbers. The ‘Russian’ movie and Aurora in it are one of Molina’s most treasured memories, those that keep him from the depths of misery. Aurora as a joke doesn’t fit.  Perhaps director Dean Bryant couldn’t resist the absurdity of it and, in the context of this sad, sad story, sought to add some humour – something he does elsewhere, although not to such debilitating effect.

This Kiss of the Spider Woman then is not as great as it could be. The attempt to ‘lighten things up’ goes too far and risks diluting the drama. But the music and Mr Melham’s Molina make this a show not to be missed.