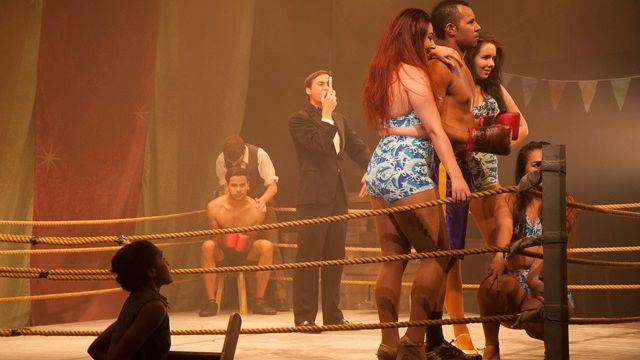 Beat that Drum! Ring the Bell! This is a boisterous, adrenaline-charged collage of drama, music, song, and dance performed by a huge all-indigenous cast. Inescapably infectious entertainment!

Capturing the 40s and 50s side-show-alley boxing tent era, Bennett’s simple plot traces the rise and rise of a young aboriginal boxer determined to exploit his talent to national status. Inspirational role models are depicted in the huge tent banner portraits. That he achieves his goal is a miracle, given all the laws of the day controlling aboriginals, their lifestyles, employment opportunities and income.

The show’s pace and atmosphere depend heavily on music and song. Credit there goes to the handful of talented composers of original songs, and the beautiful harmonies achieved by the soloists, vocal groups and backing singers. Despite style variations from the 40s to rap, this show rocks! Credit there must go to musical director, Laine-Loxley Danam, and to choreographer, Penny Mullen for the dancing. Josh McIntosh’s inspired design embraces the whole venue; show touts and shady personalities engage patrons in the foyer, and become the vocal crowd inside. Jason Glenwright’s lights capture the action from side-show alley (audience space), to the upper spruiking level where potential combatants were invited to come on ‘up the ladder’, and the stage area.

Director Wesley Enoch now has two audience successes running simultaneously at QPAC. Is this a record? This ensemble gives best value for your buck in Brisbane.