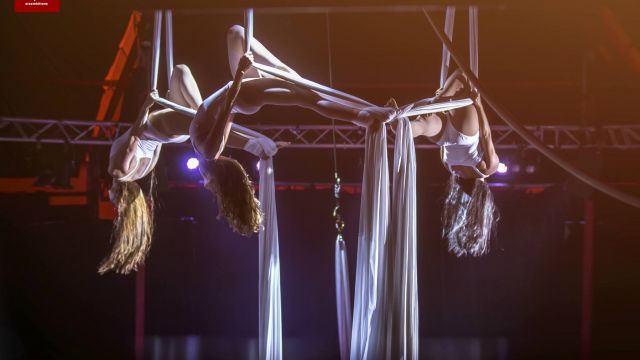 ‘Quite spectacular’ would be the summation of Le Aerial.

Suitable for young and old, this show is a beautiful piece of circus theatre. Young acrobats with rippling muscles and taut bodies fly gracefully and powerfully high in the air, performing death-defying feats.

The four young women and two men who perform use many different types of apparatus to display elegance and skill in a very ‘Cirque de Soleil’ style show. Their skills, synchronised with music and each other, draw the audience into a dream-like state as we watch them spin, hang, balance and entangle themselves high above the floor.

Local talent Mark Oates vocally accompanies most of the show in a classy, sharp performance. Oates drifts about the stage, drawing our attention to the performers only; he is unobtrusive, yet his powerhouse vocals become entwined with the movement of the aerial performers.

Highlights of the show include a particular display of acrobatic skill using chains and a net while suspended high above the stage, an aerial duel between the two male performers and the fabulous finale where four silks are used to enthral the audience, who gasp and applaud at the lithe spins and drops of the performers.

At 60 minutes, the show is captivating from start to finish, with Oates navigating us from set to set in ‘ring master’ style.

The lighting would be the only area for criticism- whilst quite spectacular in the use of LEDs, sometimes the changes and brightness pulled focus from the performers. Overuse of red became at times distracting.

That said, this is a beautiful performance, visually and audibly. These talented hard working performers from Aerial Artists Australia deserve high praise.